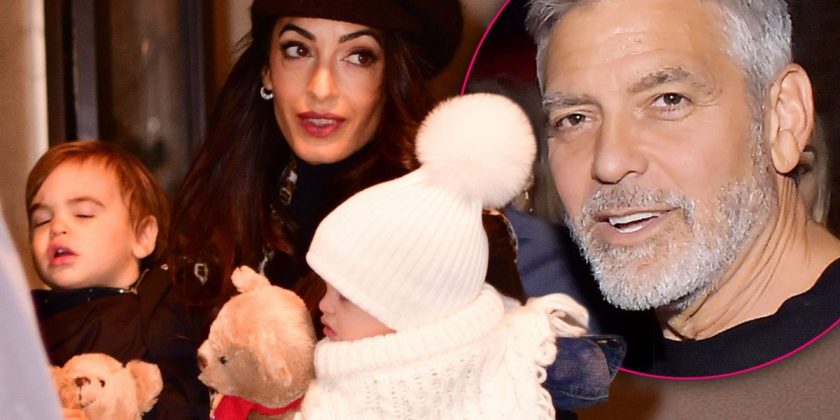 With his marriage hanging by a thread, George Clooney hasn’t been seen in public with his adorable twins in about 200 days!

Cute-as-a-button tots Ella and Alexander have been photographed with their glamorous lawyer mom, Amal — as buzz of bitter divorce and custody battles swirl around the power couple.

“George and Amal have been arguing over their varying lifestyles — and rumors of a rift have been going around for months,” said an insider. “She’s all business, he’s all play. They’re like oil and water. They don’t mix — and there’s talk of a possible custody fight over the twins.”

Adding fuel to the divorce talk, the couple — who wed in September 2014 — have not been photographed together since Aug. 11.

“He was whooping it up in L.A. with his friends while she stayed in New York with the kids, attending the United Nations General Assembly,” the insider continued. “Everyone’s buzzing that George told Amal he wanted out of the marriage!”

What’s more, Amal has fled the couple’s marital home in England and set herself up in a new hideaway on the idyllic Italian island of Sardinia with the 20-month-old twins.

But according to insiders, the spouses have been living separate lives
for a while.

“George has been partying a lot and hanging out with his business partner Rande Gerber. George likes to be the life of the party. It helps him to take his mind off his troubles,” said a source.

The Oscar-winning actor was 56 when he became a first-time father — and he couldn’t stop gushing about Ella and Alexander.

PHOTOS: Love ‘Em And Leave ‘Em! 15 Of George Clooney’s Lovers Over The Years

“They’re born with personalities,” the Ocean’s Eleven star said. “Ella is very elegant and dainty and she has these big beautiful eyes; she looks like Amal. He’s just a thug, he’s a fat little boy, he laughs louder than everyone in the room; it’s the funniest thing.”

Despite being a no-show dad, “George intends to be an integral part of his children’s lives if there’s a divorce,” insisted a source. “He knows some of the best lawyers in L.A. and he could arm himself with quite a legal team to keep his $520 million fortune and the twins.”

“But, Amal is a tough barrister in her own right,” the source added. “She’ll likely fight tooth and nail to get full custody of those kids. It could get very ugly!”