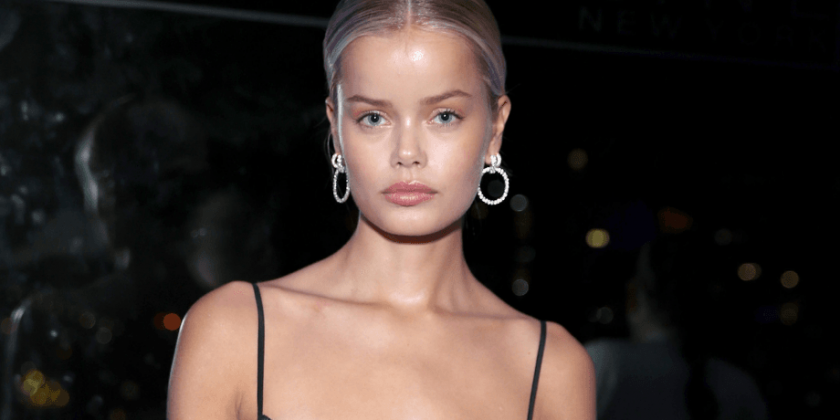 Model Frida Aasen went braless under a baggy shirt on Instagram, and fans are loving the black-and-white photo. It’s hard to know what was going on at the time the photo was taken, but it looks like the model was perched on a chair by a busy street when a school bus rolled by. Frida looked chic as ever with her hair pulled back in a messy bun, as she sported a heavy shirt with no bra underneath. It was simply buttoned once towards her belly button, and the sleeves were rolled up. Fans exclaimed, “Amazing shot,” “This is so Gorgeous,” and “Perfect face.”

This was her first post in 10 days, as she previously shared a selfie of herself wearing tons of makeup. In the picture, Frida appeared to be in hair and makeup as her hair was being held up by curlers. She wore purple eyeshadow, a cat eye, mascara, and glossy pink lipstick. The model also sported small hoop earrings, along with a necklace and black robe with gold stars on it.

Prior to that, Aasen gave fans a peek at her tropical getaway, as she posed in various bikinis and lounged on hammocks. It’s likely she was enjoying some down time after a hectic schedule walking for the Victoria’s Secret Fashion Show.

Previously, the model spoke with Inoubliable Model Army about some of her personal life, including where she grew up.

“I’m from Kristiansand, located in the southern part of Norway. Kristiansand is not as big as the cities I get to visit all around the world, but I still love it. It’s located by the sea and in the summer it is very beautiful. Nearly all my friends and family live there, so when I’m travelling, they are what I miss the most.”

And for those who were curious, this is how Frida was discovered.

“I was discovered at age 14, by a scout and agent named Donna Ioannou. I was shopping for Christmas presents with my sister when Donna came up to me and asked if I wanted to become a model. I remember I thought the whole thing was a little embarrassing and surprising. There was no way I would have thought I could be a model!”

Obviously Aasen was wrong to think that she couldn’t have been a model, as she’s found good success in the industry. In 2018, she was featured on the cover of The Daily Summer and Issue Magazine. Plus, she worked on an ad campaign for Capri Clothing among many other ventures.