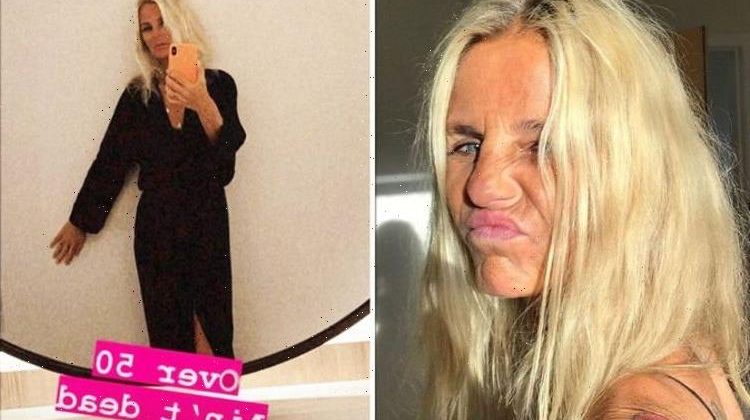 TV presenter Ulrika Jonsson has hit out at critics in a defiant snap she posted to her Instagram last night. In view of her 173,000 followers, the star, 54, posted a series of pictures of herself before a glamorous evening out, which saw her get dressed up to the nines and declare that “over 50 [isn’t] dead”.

For all the ageist f***ers out there

Relaxing on a comfy looking bed, Ulrika fanned out her blonde tresses as she revealed she was enjoying a night away from home.

“Thank you @doubletreebath for putting me up or putting up with me tonight,” she captioned the snap, while smiling into the camera.

In the next story, Ulrika lay on her front on the bed, allowing her numerous gold necklaces to fall into the cover while she pouted for the snap.

After having got ready, Ulrika donned a floor-length, black maxi dress with a daring split up one side and a plunging neckline.

Leaning against the wall, the star definitely took a selfie, writing: “For all the ageist f***ers out there.”

In the next picture, Ukrika leaned seductively against the wall as she flashed a glimpse of her tanned legs.

The mother-of-four kept her hair in its natural wave while opting for a smudge of dark brown eyeshadow and a slick of natural pink gloss.

Hours later, Ulrika collapsed back into bed, revealing that she had had a “great night”.

However, this morning the star admitted that she wasn’t feeling her best, writing: “Not feeling so fresh this morning.

This isn’t the first time the star has hit back at critics.

In June the Swedish media personality stripped off to highlight the importance of men’s mental health in a new campaign.

Wearing just a pair of wellington boots and a red flower in her hair, Ulrika strategically covered herself as she posed in the buff with a wheelbarrow.

But soon after posting, the star shared a brutal message from a troll who reached out to her on social media.

“Men are NOT the only one that is guilty of young girls getting raped.

“These stars are just as much guilty because of their part in everything.”(sic)

Ulrika then hit back as she replied: “That’s absolutely right.

“I’m guilty of the rape of young girls because I’ve taken my clothes off for charity.”

Ulrika’s post urged her followers to donate £5 to @strongmenorguk and ended: “It’s never unmanly to talk”, before she nominated some of her celebrity friends to take on the challenge next.