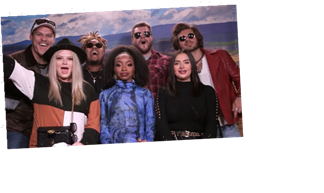 As you can see in this trailer, they are once again showing that this show has a lot of heart underneath the wild veneer.

The cast is traveling to new states, but their adventures are not without drama and tender moments.

“We may be crazy, but we are also a crazy family,” more or less sums it up.

Floribama Shore returns with a vengeance on Thursday, February 25.

The premiere will air immediately after the midseason finale of its MTV sister series in the Shore franchise, Jersey Shore: Family Vacation.

Taking cues from the older series, the stars of Floribama Shore are embracing travel.

For three seasons, the show’s cast has remained in Florida. Now, it’s on to new horizons.

The gang is heading west, to Lake Havasu, Arizona.

As you can see in the trailer, they are also traveling north to Montana.

We have all known for some time that the show was in production.

But this is the first official confirmation by the network that, yes, Season 4 is officially happening.

It’s nice that we don’t have to wait for a trailer or a release date — and we have it all one month in advance!

Fans have discussed how — ironically — traveling to specific, remote, outdoor destinations as a group was likely a COVID-19 precaution, at least in part.

In November of 2020, Season 4’s filming was paused for two weeks after a member of the crew tested positive for the novel coronavirus.

That more people were not infected appears to indicate that the restrictions put in place did as intended — keeping the virus from spreading.

But this time, their annual trip is obviously going to be a bit different.

They’re heading to remote locations with limited access to the outside world.

This means, among other things, that the drama is going to be a lot more personal.

Very few outside distractions will be around to distract everyone from last summer’s issues, grudges, and unresolved tensions.

Being cooped up with people on a trip can that the journey is about more than distance — it can be something that is personal, emotional, and even painful.

That much is clear in the trailer, as we see tensions boil at times even after so many laughs.

But as is emphasized in this preview, just because there is drama and even hostility doesn’t mean that the cast hates each other.

Instead, they’re a family — with all of the good and bad that comes with it.

A lot of reality television is met with a critical eye for casting walking disasters … but there’s more than just entertainment to be found with Floribama Shore.

Some critics have noted that the show has a lot of potential in terms of humanizing a subculture and prompting people to question their classist assumptions.

After all, the first step to seeing people as human instead of stereotypes is to get to know them, and reality TV can let people do that while they’re being entertained.

This “fish out of water” storyline in Season 4 could add to that relatability, as you can pluck people from any two random parts of America, plop them in a third location, and they’ll make the same jokes.

That absolutely extends to pretending to be a cowboy in Montana.

Still, no one is marketing this show as educational television, and they shouldn’t. It’s a show about messy partying, about life, and about found family.