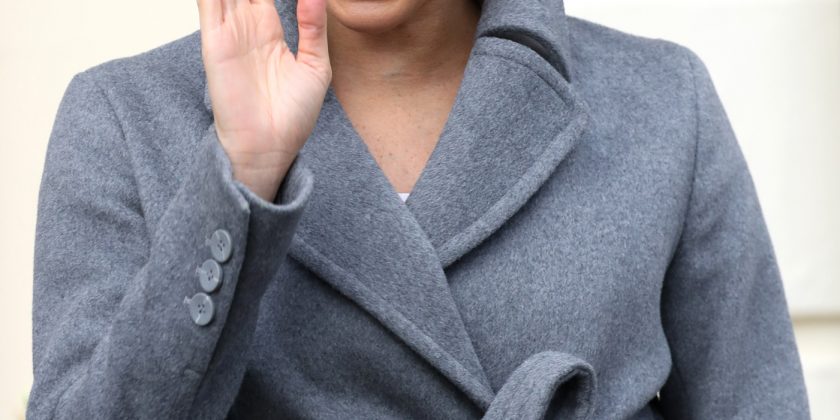 Meghan Markle helped spread some Christmas cheer in her final engagement before the holiday break.

The former actress received a curtsy as she arrived at the Brinsworth House, a residential nursing and care home for British entertainers run by the Royal Variety Charity.

Last month, Meghan and husband Prince Harry took in the Royal Variety Performance to benefit the charity, which helps hundreds of British entertainers in need of assistance as a result of old age, ill-health or hard times.

Meghan, 37, continued to put her collection of cold weather coats on display in a grey number by Soia & Kyo that she wore unbelted to show off her white Brock Collection dress, which featured grey florals and hugged her growing baby bump.

Meghan’s father-in-law, Prince Charles, visited Brinsworth House in 2002 and his grandmother, the Queen Mother, toured it in 1990.

Speaking with retired West End theatre actress Josephine Gordon, 87, Meghan said she was “very good.” She then paused, put her hands on her growing baby bump and added that she was feeling “very pregnant today.”

Meghan was given a tour of the facilities and then took part in the festive fun, including craft-making and listening to Christmas carols.

Meghan showed off her skills as a former calligraphy teacher with the crafts as well as her signature in the visitors’ book.

The Duchess of Sussex also executed a traditional royal duty: unveiling a plaque!

Meghan spoke fluent Spanish to one resident and told the actors how she had visited a similar home for artists in Los Angeles many times.

She saw where residents have their hair done…

…and where they could grab a cup of tea.

It is Meghan’s last public engagement before the Christmas break.

She and Harry will soon head off to Norfolk to join the other royals at Sandringham — but first, the couple will celebrate with Queen Elizabeth and the extended family at an annual lunch party at Buckingham Palace. The Queen usually heads up to her rural retreat the following day.

As she left the Brinsworth House, Meghan told the crowd, “Merry Christmas.”