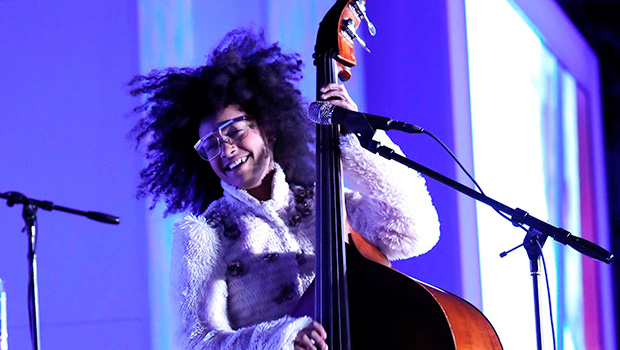 Esperanza Spalding will be hitting the stage with John Legend during ‘The Voice’ season 15 finale on Dec. 18. So, who is Esperanza? Here are 5 key things to know about her!

The Voice is in for quite the treat when Esperanza Spalding, 34, hits the stage during the season 15 finale. She’ll be performing a holiday song alongside John Legend. Esperanza is one of the premier jazz musicians of our time. Check out these 5 key facts about Esperanza!

1. Esperanza is a singer and jazz bassist. She pursued music at a young age, and she even taught herself how to play the violin, according to Biography. Her passion only grew from there. She studied violin, bass, and more. She joined the faculty of Berklee College of Music at just 20 years old.

2. She made history after winning a Grammy! When Esperanza won the Grammy Award for Best New Artist at the 2011 ceremony, she was the first jazz artist to ever win the award. She beat out Justin Bieber and Drake for the award! She went on to win two more Grammys in 2013 and one in 2014.

3. She just released a new album. Esperanza’s latest album, 12 Little Spells, dropped in Oct. 2018. Over the course of her career, she has released a total of 7 albums.

4. She’s collaborated with many jazz greats. Esperanza has teamed up with Patti Austin, Michael Camilo, Quintino Cinalli, Leo Genovese, Herbie Hancock, Bobby McFerrin, and Pat Metheny. She also collaborated with Janelle Monae and Harry Belafonte on her song and video “We Are America.”

5. She’s featured on John’s Christmas album! Esperanza and John team up for a soulful rendition of “Have Yourself A Merry Little Christmas” on his holiday album, A Legendary Christmas. John will be a coach on season 16 of The Voice!