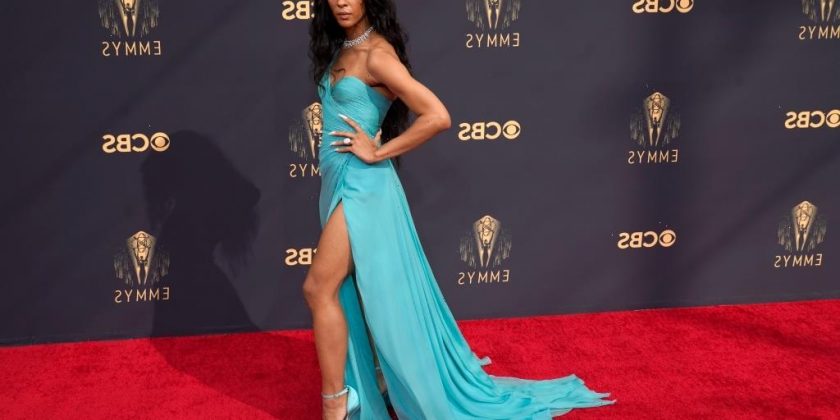 On Sunday evening there was an almost-move back to normality at the Primetime Emmys. While the usually huge guest list was pared way down due to COVID, it was heartening to see the nominees stalking the red carpet all dressed up with somewhere to go.

One of the first to hit the red carpet was Nicole Byer, wearing custom Christian Siriano. Nominated for Outstanding Host for a Reality or Competition Program, she lost out to RuPaul at last Sunday’s Creative Arts Emmys. Asked on the E! pre-show who she would have thanked had she won, she said, “I would have thanked all the fat black ladies who came before me because there are very few of us.”

Next up was Josh O’Connor in a classic tux with a twist. Instead of the standard tie, he wore a black flower at his neck—a custom Loewe look by Jonathan Anderson. O’Connor is an ambassador for the brand that also dressed him for the Golden Globes earlier this year, and was styled by Harry Lambert, who also works with the notoriously stylish Harry Styles.

Close behind O’Connor was double nominee Kenan Thompson, making an impression in an all-pink tux with a bold maroon spotted pocket square.

The ever-stylish red carpet star Billy Porter did not disappoint. His look by Ashi (a designer he also wore to last year’s Emmys) comprised a clinging all-black silhouette with giant wing-like pleated sleeves and a statement diamond and emerald collar with a pair of diamond ear cuffs.

The show’s host Cedric the Entertainer also didn’t hold back with his look in a suit with two shades of diagonally striped teal against a charcoal and slate grey shirt and bowtie.

Rita Wilson went for a black-on-black rock and roll vibe with a Tom Ford black satin suit in a subtle stripe and a black sequined top. “Because I don’t pop molly I rock Tom Ford” she quipped on E!, quoting Jay-Z’s song “Tom Ford”.

One of the night’s most anticipated nominees, Mj Rodriguez stunned in Versace Atelier, which, according to the E! pre-show, was her first choice when she received her nomination for her Pose role. Her stylist Katie Bofshever told E!’s Zanna Roberts Rassi that Rodriguez sketched the look initially and they chose teal because it was a “rich saturated color”. She also told Rassi that the look is “paying an homage to old school Hollywood but while very much looking into the future, because she is the future.