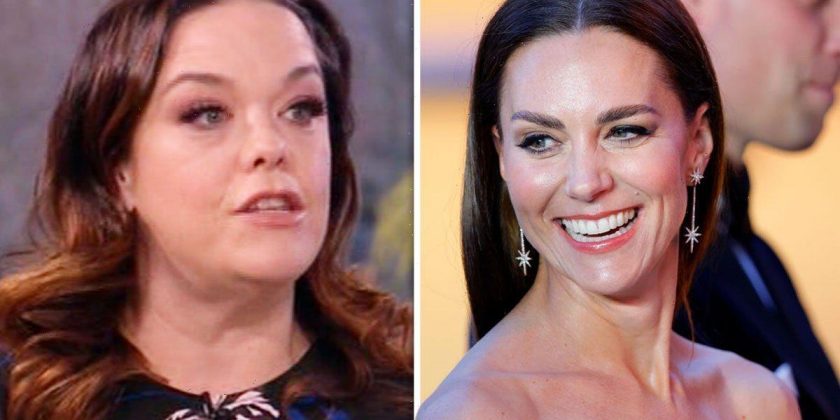 Lisa Riley, who plays Mandy Dingle on Emmerdale, took to Twitter and explained she purchased the exact same shoes worn by Kate, Duchess of Cambridge. But the ITV favourite admitted it may not have been the best idea.

The 45-year-old said she had been left in “pain” after trying out the footwear.

Taking to Twitter yesterday, the Emmerdale star penned: “I have just purchased some shoes online for this year’s @SoapAwards 2022 they got delivered this morning. They are the shoes that Kate Middleton wears a lot !!!

“For some reason, I can’t seem to walk like Kate Middleton, I am walking like a Rugby player.”

The Dales actress was flooded with messages following her candid admission ahead of the Soap Awards 2022.

Twitter user, Eileen commented: “I’m sure you will look equally as elegant. Have a few rehearsal walks before the event and keep a pair of slippers handy for later on. Head up, chin up, girl you’ve got this.”

Kyp agreed: “Hope you break them in before you step up to collect your award.”

Lindsey shared: “I feel your pain. Had to say goodbye to my dream wedding shoes when I found I couldn’t even walk to the mirror to look at myself wearing them.”

Lisa didn’t indicate the exact shoes she had purchased but Kate is known to wear a plethora of show-stopping footwear.

From trainers, to court shoes, to suede pumps, the Duchess of Cambridge is often pictured in great shoe designs.

It is rare to not see Kate sporting an elegant high heel when she attends various engagements.

Meanwhile, Lisa is gearing up for The British Soap Awards which returns live to ITV and ITV Hub this June after being off the air for two years.

The awards will take place in London at The Hackney Empire and will honour the nation’s biggest and most-loved soap operas.

Hosted by Phillip Schofield, the live awards will be presented by an array of well-known faces from across the TV and showbiz world.

The five biggest soaps – Coronation Street, Doctors, EastEnders, Emmerdale and Hollyoaks – will be battling it out to win recognition for their work over the past year.

Some of the biggest faces from all five soaps will be hitting the red carpet for the most star-studded and glamorous event in the soap calendar.

The British Soap Awards recognise outstanding achievements in the country’s most popular television genre and there are 14 awards voted for either by the public or a panel of expert judges.

Lisa urged fans to vote for Emmerdale in a tweet posted earlier this week.

She wrote: “VOTE. VOTE. VOTE. Everything @emmerdale how will you choose your fave out of THIS brilliant bunch?? #paigesandhu @markcharnock @SarkerRebecca @HordleyJeff @SallyDexterUK @lucyparge and of course the programme is nominated also BEST SERIAL DRAMA #Emmerdale @OfficialNTAs.”