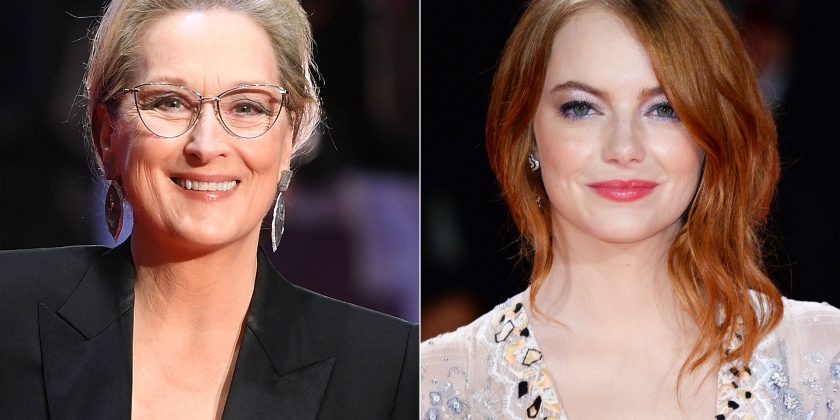 Stone, 30, revealed during Variety‘s Actors on Actors that she had never seen her major breakthrough film Easy A. “I haven’t seen it. No, I’ve seen some scenes,” she admitted. “But I went to a friends and family screening to see it and I had to get up and walk out. Who wants to watch themselves for that long?”

The actress actually does watch her own movies, but only once. Of repeat viewings, she said at the Monte Cristo Awards: “I don’t do that. I just look ahead.”

The Oscar winner, 49, told GQ in 2012 he wasn’t fond of looking back at his performances. “The fact that I like to make characters doesn’t mean that I like to watch my characters being made, my performance,” he said. “I can’t even watch that f—— nose, that f—— voice, those ridiculous eyes. I can’t handle that.”

The actress, 32, told the New York Daily News in 2009 that she needed a few drinks to watch Transformers. “I forced myself to sit down for Transformers 2,” she revealed. “I shot an entire glass of champagne so that I could get through it.”

The actor told Collider in 2010 that he tends to “pick out every single flaw” in his performances. “I don’t know why, but I tend to dwell on those things. I’m more of a cringer, at first,” he shared. “And then, when it’s years down the road and it’s out of the way, I can look back and appreciate it somehow.”

“Now, I don’t have a TV. I have like Netflix and HBO GO, but I don’t have regular TV, so it’s never on in my house,” she explained. “My kids watch it, like at their dad’s house, or on the iPads. But I don’t know that I’ve ever watched it. I watch clips.”

Smith’s had countless famed roles over the course of her six-decade-long career, from The Prime of Miss Jean Brodie (for which she won an Oscar) to Harry Potter. But her last role, as the Dowager Countess in Downton Abbey just may be her best-known. And though she’s world-famous for her one-liners, she’s never seen them on the small screen. “No,” she responded when CBS News asked her if she’d ever seen the show. (She’s previously said during an interview at the BFI & Radio Times TV Festival that she “really” doesn’t like to watch herself.) But that may have changed in the years since the show has wrapped. She said: “They gave me the boxed set. And I’m going to do all sorts of things now, ‘cause I’m free!”

The Dawson’s Creek finale was the end of an era. But Dawson himself, Van Der Beek, didn’t want to witness it: he’s never watched the last episode of the show. In fact, he doesn’t even feel that connected to it anymore. “I’m not as invested in that because it was something that I did, not something that I wrote,” Van Der Beek said during a visit to the Allegedly podcast. “I was a part of it. I felt like a passenger on the whole thing.”

Audiences — and Academy members — fell in love with Leto’s portrayal of Rayon, a transgender woman living with HIV in Dallas Buyers Club (he won an Oscar for the role). But Leto doesn’t want to see what all the hype is about, saying not enough time has passed for him to watch the movie. “I can’t hear that voice!” he said of the part. “I’ve never really heard very much of it and I’ve never watched the film. I will at some point, I’m sure. But too soon! It can never live up to the expectations I would have of it now because it was such a beautiful experience and the response that it got was really wonderful.”

Batman v Superman was subject to pretty harsh criticism, but star Eisenberg, who played Lex Luthor in the film, didn’t know what all the fuss was about. “I live in a bubble,” he told MTV. “I haven’t seen the movie. I don’t watch movies I’ve done.” (His parents, however, did see it, and they expressed their approval!)

After Driver watched the first-ever episode of Girls, he decided he was done with it. “I haven’t watched the show,” he said. But there’s a good reason: He doesn’t want to nit-pick. “I saw the pilot, and I learned my lesson. I can’t help but see the mistakes.” (We bet Hannah would have something to say about that.)

Still Alice, Far from Heaven, The Hours, The Hunger Games — Mockingjay (parts one and two!) — Moore hasn’t seen a single one. “I haven’t seen any of my own movies,” she admitted in 2013. “I can’t sit there for a premiere or anything. I like being in the movie more than I like watching them. That’s my big thrill, rather than seeing the finished product.”

Apparently, skipping out on watching your entire filmography is a “thing” in Hollywood. Depp also swore off watching his own flicks. “I made a choice a long time ago, that I was better off not watching my films, which is a drag because you miss out on a lot of your friends’ incredible work,” Depp said. “But I feel like it would just harm me. I would rather stay as ignorant as possible about the result of anything because once you’re done playing that character, it’s really not your business anymore.”

On an Emmys panel, the Lost star admitted, “I don’t really ever watch myself,” he said. “I never watched an episode of Lost.” On the panel with him was Bryan Cranston, who couldn’t help but quip: “It’s a good show. You should see it some time.” However, Fox said that he felt knowing the dialogue was enough: “I loved the story. I got it all from the script. I just really am not comfortable watching myself.”