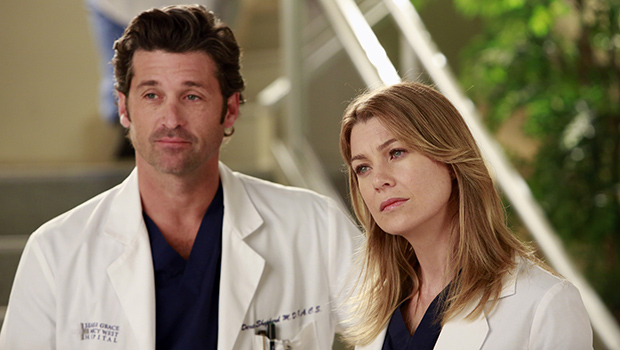 When Meredith Grey and Dr. Derek Shepherd were forced apart on ‘Grey’s Anatomy’ in Season 11, the characters’ actors had a similar fate IRL! Ellen Pompeo explained why there’s silence between her and Patrick Dempsey.

When Dr. Derek Shepherd — SPOILER — died on Grey’s Anatomy in 2015, apparently so did the friendship of the character’s actor with Ellen Pompeo, 49…or so it seems! Rather, it’s a silent friendship, as the actress insisted that she has no bad blood with her former small screen hubby, Patrick Dempsey, 52. “We haven’t spoken since he’s left the show,” Ellen confessed on the Dec. 10 episode of Red  Table Talk, hosted by Jada Pinkett Smith, Willow Smith and Adrienne Banfield-Norris. “I have no hard feelings toward him, he’s a wonderful actor and we made, you know, the best TV you could make together.” Ellen continued to stress there was no falling out, as she added, “That’s a talented man right there…he did 11 amazing years.”

The news is rather jarring, since these are the two who made Dr. Derek and Meredith Grey one of the most shipped pairings in TV history…their on-screen romance even led to three fictional children! As for why Patrick went MIA in Ellen’s life, she explained, “Typically when people leave the show, they need to sort of re-find themselves, who they are, without the show, because the show takes up so much of your life.” Patrick’s departure from the show, and Ellen’s life, is nothing personal — just a much needed move for rebranding. “You need that time to figure out who you are without the show,” she continued. “So, we have not spoken but I will always have a place in my heart for Patrick.”

Fair enough. At least for the show’s star, she sees “no end in sight,” which she revealed during a visit to The Ellen DeGeneres Show on Oct. 23. We’ve reported why she had a change of heart, after admitting she’s looking to “do some new things” during a September interview with Entertainment Weekly! Grey’s Anatomy, which is currently airing Season 15, is still guaranteed to have Ellen for the forthcoming season thanks to contract obligations — but after that, nothing’s guaranteed!

As for what Patrick’s up to these days, he has moved on to a new television series! He’s switching trades from an on-screen doctor to the CEO of a bank in the upcoming series Devils, set to premiere in 2019.