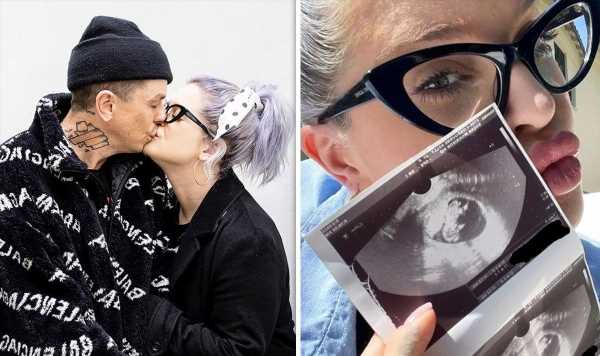 Kelly Osbourne, 37, has announced she is pregnant with her first baby. The Osbournes star posted a photo of the ultrasound on Instagram as she revealed she is “ecstatic”.

The father of Kelly’s child is her boyfriend, Slipknot star Sid Wilson, 45.

She penned: “I know that I have been very quiet these past few months so I thought I would share with you all as to why…

“I am over the moon to announce that I am going to be a Mumma.

“To say that I am happy does not quite cut it. I am ecstatic!”

Kelly’s pals and followers flocked to offer their congratulations.

Stacey Solomon wrote: “Congratulations Kelly! Sending you all the love and cuddles “.

Ross Mathews added: “YAYAYAYAYAYAY!!!!!! The news is out! You’re gonna be the best mom!!!

Kelly and Sid were reportedly friends for years, after meeting at Ozzfest, the festival created by her famous parents Ozzy and Sharon, in 1999.

But Kelly had been in a relationship with photographer Erik Bragg for a year until the end of 2021.

Months after their split, she teased that she had met someone new in cryptic Instagram posts, before confirming his identity in loved up selfies.

And marking his birthday in January, she wrote: “Happy birthday baby,” alongside a snap of them together.

Kelly’s baby news is extra poignant after a particularly stressful time for the family.

Sharon, 69, revealed she was “beside herself with worry” as 73-year-old Ozzy, who has Parkinson’s disease, contracted Covid.

Shortly afterwards, Sharon confirmed she had also caught the illness, and posted a frail-looking photo of herself hooked up to a drip.

Alongside the snap, she simply wrote “Covid” accompanied by angry face emojis.

Sharon told The Talk’s Jeremy Kyle that Kelly had also caught the virus.

“But I’ve got some news to share. My daughter Kelly has it, I have it and the entire household has it now.

When asked if Ozzy will now be looking after his wife, Sharon laughed and said: “Maybe, we’ll see. I feel OK actually.”