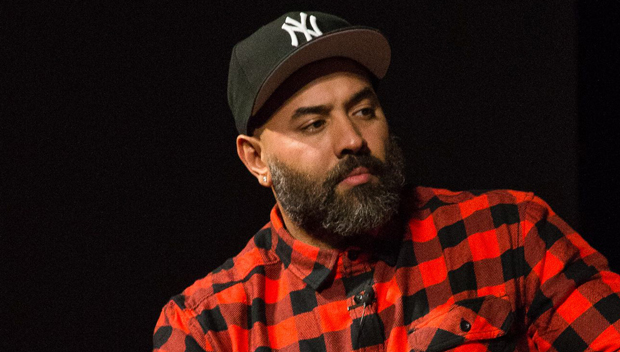 Kodak Black walked out of a radio interview on Dec. 12 when asked about his sexual assault case. Here’s what we know about Ebro, the ‘Hot 97’ DJ who pressed him.

Ibrahim “Ebro” Darden, 43, is known for his morning show on New York’s WGHT (Hot 97) — but he’s making headlines for more than just his funny quips this week. After Kodak Black, 21, walked out of an interview with Ebro and his Ebro in the Morning co-hosts, Peter Rosenberg, 39, and Laura Stylez, 25, people have been dying to know more about who this  DJ is. He asked Kodak about his sexual assault case, and when the rapper refused to comment on the “bulls*it” and wanted to talk about something else, Ebro said, “We don’t have to. We can be done here.” And just like that, the interview was over! Here’s what we know about the daring host.

1. He has feuded with another rapper… Ebro made a habit of referring to Tekashi 6ix9ne, 22, as “trash” on his Hot 97 show, and the rapper clapped back with a song from his Dummy Boy album, called “Stoopid.” He kept the diss plain and simple, saying the DJ was a “b*tch” and adding that he was “old.” Ebro freestyled a response on his show, rapping, “Clown hair you aint ready for war. You don’t want it with this old man, you ain’t ever seen it before.”

2. … and another radio host. 6ix9ine isn’t the only person Ebro has gone back and forth with on the radio — but his other feud is with Power 105.1’s Charlamagne Tha God, 40. But even though they’ve been feuding for years, Ebro clarified in 2017 that it was all just fun and games. “The stuff we do on the radio is stupid. It’s for fun,” he said on his show. “I make fun of you for fun. That’s it. It’s not that deep.. Me and that dude don’t have a personal problem… a personal relationship. It’s radio… He talks greasy about people that work at Hot. I talk greasy about people that work over there. It’s not personal. Let’s be clear.”

3. He started his radio career as a teenager. Ebro was only a teenager when he took a job as a sales runner at KSFM in Sacramento. After interning, he co-hosted night and morning shows for the station. From there, he moved to KBMB and KXJM in Portland. He wound up at WQHT in 2003 and has built a successful career there ever since, becoming the station’s Program Director four years later. But besides his Hot 97 work, the host also is an anchor for Beats 1, Apple Music’s radio service.

4. Ebro was mentioned in a Remy Ma song. When Remy Ma, 38, dissed Nicki Minaj, 36, in the diss track “shETHER,” she implied that the rapper had slept with Ebro. “Coke head, you cheated on your man with Ebro,” she said, but the radio host denied those rumors.

5. He is a dad. Ebro’s daughter Isa was born in 2014. “Lion Babe arrived fast!” he wrote on Instagram when she arrived. “Delivered my own daughter in our bathroom! Whoa! The MOTHER prepared almost too good! We did it.”