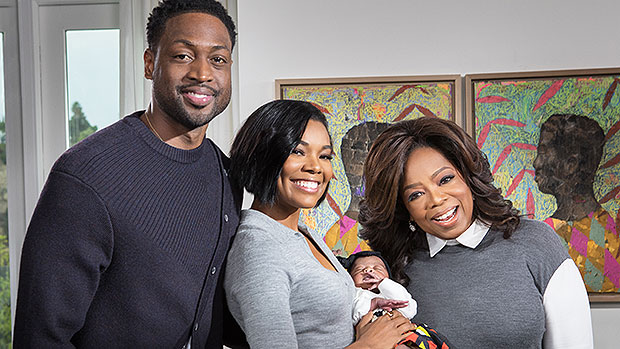 Dwyane Wade is opening up about the concern that he had for Gabrielle Union as she suffered nine miscarriages during their painful journey to become parents together.

Dwyane Wade, 36, and Gabrielle Union, 46, are sharing their heartbreaking and bittersweet journey to become parents together in a sit-down interview with Oprah Winfrey. And, for the first time, the Miami Heat player is revealing the real fear he had for his wife’s safety as she endured several rounds of IVF treatment – and nine miscarriages – as they tried to make their dream come true.

During the interview, which airs on OWN on 8:00pm on Dec. 8, Gabrielle reveals that she struggled to give up her dream of carrying a baby, despite suffering multiple miscarriages. “I’ve always been of the mindset, because this is what people tell you: You work hard, you do the right things, you’re a good person, it will happen for you – eventually…” she says in the chat with the 64-year-old talk show queen. “[I] could not let go of this idea of creating this life within me, that I could feel, that tied me to him, that he could be a part of, that the world could be a part of. I’m not letting myself and all these people down. I need to have this – I need to be pregnant for everybody, including myself.”

But Dwyane was prepared to let that dream go, if he felt that it would put his wife at risk. “But let me share something with you,” he says in the preview clip released on Dec. 6. “As we’re going through this process, I’m watching my wife who I know all these things, and I want this for us and I want this for her. But I’m watching her do things to her body and to herself that it’s getting to the point where it’s not healthy.” Dwyane, who already has three sons from previous relationships, adds, “I always tell her, ‘I want this baby just as much as you do, but I married you and you are the most important thing to me.’ There came a part where I started to feel a certain way about that, because I didn’t want something to happen to her, and it was getting dangerous. We were trying so much and so many things and so many different methods and it was getting dangerous and I was getting nervous.”

“Life is what happens when you are busy making plans." If this ain't the truth. When life doesn’t care about your perfectly planned out version of what you think your journey through this world is supposed to look like. Life belly laughed at my plan. Life did not care what people would say. Life had other things in store for me and our family. Figuring out how to let go of the idea of what motherhood should look and feel like, what a mother even is… that was a challenge. We share our story, our journey Saturday Dec 8th at 8pm on OWN with @Oprah

Eventually Dwyane and Gabrielle finally chose to become parents through surrogacy and on Nov. 7 their beautiful daughter Kaavia was born. She is the little sister to Dwyane’s three sons – Zaire, 16, Zion, 11, and Xavier, 5. Sharing a snippet of their interview with Oprah, Gabrielle posted on her Instagram page on Dec. 6, “Figuring out how to let go of the idea of what motherhood should look and feel like, what a mother even is… that was a challenge.” She also wrote, “Life had other things in store for me and our family.”