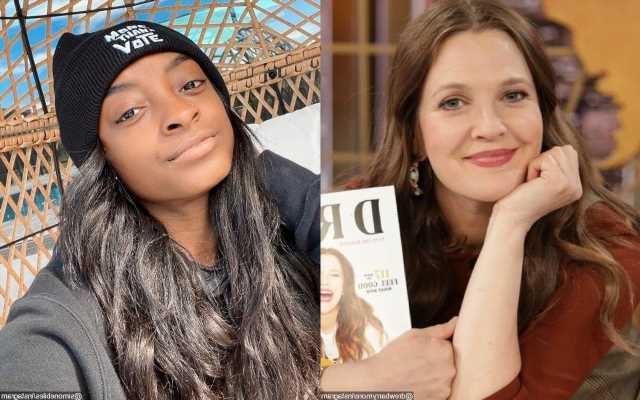 Praising the gold gymnast after she withdrew from the Tokyo Olympics due to mental health reasons, the host of ‘The Drew Barrymore Show’ calls the former ‘bold.’

AceShowbiz -Fans rallied behind Drew Barrymore after she got personal in a tribute to Simone Biles. Having praised the gold gymnast, who bravely withdrew from the Tokyo Olympics to focus on her mental health, “The Drew Barrymore Show” host found herself being showered with support by her online devotees.

Drew shared her dedication to Simone via Instagram by sharing several pictures of the 24-year-old. “I am in awe of you. Without any assumption to know you, I believe you continue to set a bar for life that is unparalleled. So many people don’t know what to do and how to take care of themselves,” she began her lengthy message.

“I have spent so much of my life running,” the 46-year-old then admitted. “Started at 11 months old working and I have been running ever since. I am happy. Just another human on my journey. But I fight like a lion for that happiness by kicking my own butt all over town trying to achieve self improvement. I hate the term self care. There is no fight in it and it is too passive for me. But I now have a face.”

“You! Simone Biles. A beautiful embodiment of what it’s looks like to say no and stop running some times. It is in the form of an insanely disciplined and impossibly talented human. I will see you and your face the next time I am unsure of how to stop running,” she continued. “You have changed lives with this. You gave up so much and I am convinced your rewards will be far greater. The return on the investment of ourselves is priceless, And yet you sacrificed so much to be this bold.”

The “50 First Dates” star concluded her message by thanking Simone for being a “greater hero in this moment.” She further noted, “I will be envisioning you as I move forward in my own life. I believe I am among a sea of grateful people, that get to keep loving and admiring you. Now for even bigger reasons than the seemingly insurmountable ones before. Lead. Please. But also please ask of people what you need too. And then we can all take care of each other.”

In reaction to the post, many of Drew’s followers reminded her that she’s also as inspiring as Simone. “Drew, you are that person to a lot of people too,” one fan raved, before another added, “Such beautiful and kind words, from such an amazing woman herself! If only you knew how much you inspire people in this world too!”

As for Simone, she announced her decision to pull out of the women’s team gymnastics final at the Olympics on Tuesday, July 27. “My pride is hurt a little bit. After the (vault) performance that I did (on Monday), I didn’t want to go into the other events so I thought I would take a step back,” she declared at that time. “I have to focus on my mental health and not jeopardize my health and well-being.”