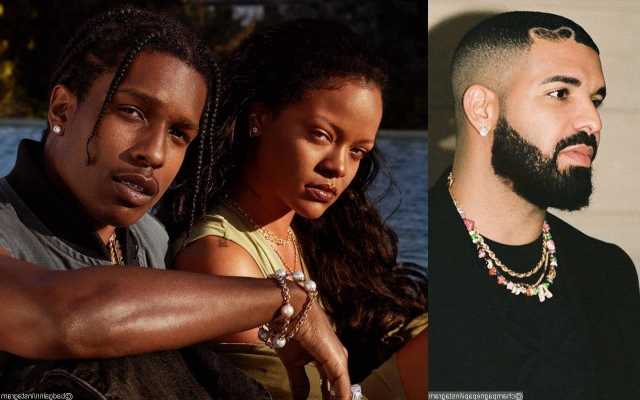 The ‘Love the Way You Lie’ hitmaker reportedly breaks up with the A$AP Mob member after ‘she caught him cheating with Fenty footwear designer Amina Muaddi.’

AceShowbiz –Drake is trending after Rihanna and A$AP Rocky‘s split rumors emerged. A number of online users teased the Canadian superstar on Twitter upon learning of the “Umbrella” hitmaker and the A$AP Mob member’s alleged breakup.

The split report was first brought by someone on Twitter. “Rihanna & ASAP Rocky have supposedly split up,” the message read. “Apparently Rihanna broke up with him after she caught him cheating with Fenty footwear designer Amina Muaddi.”

The tweet has since gone viral. Unsurprisingly, people brought Drake’s name like they did when Rihanna confirmed that she is expecting her first child with Rocky.. One person in particular shared a picture of the “God’s Plan” hitmaker typing on a computer. The caption read, “ASAP Rocky… is cheating… on Rihanna… with… Amina Muaddi, yea, that’ll get the people going.”

Another showed the Grammy-winning hip-hop star screaming in the middle of a crowd. Alongside the picture, there’s a note that read, “Drake after hearing Rihanna and ASAP Rocky are no longer together.” A third, in the meantime, put out a snap of Steve Carell‘s Michael Scott from “The Office” running. The individual penned in the accompanying message, “Drake on his way rn to console Rihanna after ASAP Rocky cheated on her.”

Neither Rihanna nor Rocky addressed the rumors. However, the “Take a Bow” songstress gushed over their romance when speaking to Vogue earlier this month, “I love the simple things but also the grand adventures. There’s no pretentious my-brand-your-brand bulls**t, it’s just us living,” she said. “I just feel like I can do any part of life by his side.”

“What I love the most about us? Transparency with everything: how we’re feeling, what our goals are, what our fears and insecurities are,” the pregnant Barbadian musician further raved. “The vulnerability to be able to say what you feel about each other.”