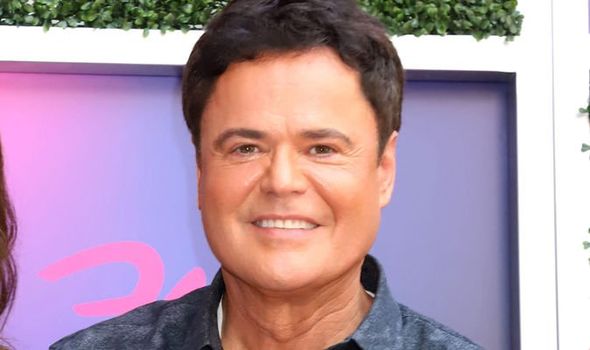 The one-time teen heartthrob – now just a heartthrob – is weeks away from taking centre stage in Pantoland at the Palladium and is just as buzzed as the crowds.

Osmond, 63, still embraces being a sex symbol despite being a grandfather, even though his children are still mildly unsettled by his superstar status.

And while the squeaky clean entertainer has resisted infamous rock star demise with drugs, pills and booze – he confesses his drug of choice remains audience adulation. But the Utah-based artist believes the key to his six decade-long career is never “resting on his laurels” even when he stared career oblivion in the face. Osmond declares the UK holds a special place in his heart: “my entire career there has been nothing like British audiences.

“When you go back to Osmond mania, there is something about Brits that they appreciate the music more and have fun. “And that is indicative of why panto is so popular. To be honest, panto is inherently fun. The Brits know how to have fun.

“Sometimes we take ourselves too seriously over here.” Certainly Osmond finds the humour in being a sex symbol – even if his children and grandchildren still find it unusual. Asked about dealing with the screams, he chuckles: “Go for it. If you were screaming back in the 1970s and you yell out, ‘I love you’. I will. I love you too. “It is not Donny Osmond, it’s The Wizard in the show. I want audiences to have as much fun as we are having on stage.

“When your children and grandchildren grow up around it – it’s my life so they do not know anything different – they get it. But it is still a little bit of shock. “I have watched them after they’ve seen my [legendary Las Vegas venue] Harrah’s performances, particularly with this new show, and how the audience is going crazy at the end.

“It changes the dynamic when they come back and go, ‘Wow, Grandpa’s a star’. Then over time it wears out – I am just granddad again. I wear different hats – yes showbiz is something I eat, sleep and breathe, but I don’t let things get in the way of being a dad, husband or grandad.”

Osmond is ecstatic about starring at the London Palladium with pantomime royalty Julian Clary, Paul Zerdin, Nigel Havers and Gary Wilmot. “I respect that space.

It is almost holy ground because of the history in the theatre – many people believe it is the greatest theatre in the world. “you cannot let it inhibit you. As an entertainer, you hit that stage with all the confidence in the world, but also with respect to what that theatre has seen over time.

Add that to the enthusiasm and excitement of me as MC, we will produce the greatest panto show ever.

“This is a huge variety show, and as The Wizard I take the audience on a journey and it’s is going to be magical, and what’s beautiful is that the whole family can come to see it. “I am the glue and let them do the comedy. I will be singing some amazing songs about panto and a segment of my brothers’ and solo hits. And just wait until you see what I am going to be doing with [America’s Got Talent-winning ventriloquist] Paul and Sam… I really want to tell you how funny it will be, but come see it.”

Known for his squeaky clean image, he teases: “I will not get as dirty as those guys, but it will be irreverent, sarcastic filled with naughtiness on stage. I’ve never performed panto so it’s a challenge.”

The show is just the latest adventure in osmond’s astonishing career, rolling from boyband pin-up, child musician and TV star, to Las Vegas legend. It’s not always been a smooth ride. during the 1980s he was an outcast, facing career extinction.

“I have been up and down and everywhere inbetween. I could have jumped out of this business a long time ago because of how hard it is. The secret is you never reston your laurels and you do things that are challenging and sometimes difficult. But when you love what you do – and I’ve had a lot of different challenges – winning the masked singer and Us strictly and tackling Vegas. when you succeed it’s great, but even just trying is exhilarating.”

Osmond admits that the lows helped him understand that while the show is important, the business is too. “I have made and lost it. When I was rebuilding in the 1980s you become a bit more business savvy. When I am an entertainer – when I wear two hats – I do all my own engineering and producing but you have to know when to take off the producer’s hat and wear an artist’s and vice versa. I surround myself with amazing people.

“You cannot be naive enough to think life is a bowl of cherries and let the business people take care of me. Because that is why I lost everything in the 80s. I did not know what they were doing and I trusted way too many people without checks and balances.

Now age checks and balances come with business savvy and education. “Nothing slips through the cracks through me. I am businessman as well as a showman.” He thanks wife Debbie, whom he married in 1978, as being the core grounding factor in his life, keeping him connected to his family. “I know how important family has been for my personal stability.

“I have a wonderful wife, who’s an amazing person. We are congruent on how to raise a family – and yes we have made mistakes, just ask our children – but now we are grandparents we absolutely love it because you feed them the candy and send them home.

“They love to visit grandma’s house, which is home of joy and fun. Yes, there are rules and within boundaries there is enjoyment, fun and unconditional love. I went through a time where I was very lonely, but it made me appreciate my home life.” Osmond is one of a handful of music icons to steer clear of sex and drugs, but insists his addiction is the stage.

“There is something about it which is euphoric. It is the magic and I want that drug. I love the creative process, always reinventing myself and keeping going for six decades,” he says.

And don’t think that being in his mid-60s is a time to reflect on slowing down. “If there is an audience I am going to play to them. If it is something that pleases the audience or excites me then I would do it. “I have got so much energy left in me and  I feel I will go on for a long time. As long as it is commercially viable and the audiences like it. I enjoy taking people on this journey.

“Watching Elvis Presley and getting to know him; he was a master at getting people in the palm of his hand and taking them on his own journey. I love that feeling and it’s such a huge responsibility. “And if you do it right and people say that is worth the price of admission, then I have done my job and it is fulfilling.

What is happening where you live? Find out by adding your postcode or visit InYourArea

“When I started Joseph And The Amazing Technicolour Dreamcoat in London, my amazing director, the late Stephen Pimlott, told me something life changing. He said:

‘The theatre is a place where people come to dream in public and you are in charge of that dream’. It affected me so much and has stayed with me.”

A fan of young pop stars such as Justin Bieber and Ed Sheeran, Osmond adds: “I am a realist. I cannot compete with the same audiences as Justin or any of those artists. But I can possibly do a duet like Lady Gaga did with Tony Bennett. I take the tools that I have at my age and maximise them to the extent that I can with a dose of reality.”

His friend, the late King Of Pop Michael Jackson, remains an important guiding voice in his career. “I gave him a ride to the studio once and he played me Thriller before it came out “I said, ‘Mike, how I can get back to charts and what kind of music should I do?’ “And he turned to me – ‘Do what do you want to.. it’s all in you’. “The challenge is that it is a fine balance to be commercial. Ed Sheeran knows how to reinvent himself.”