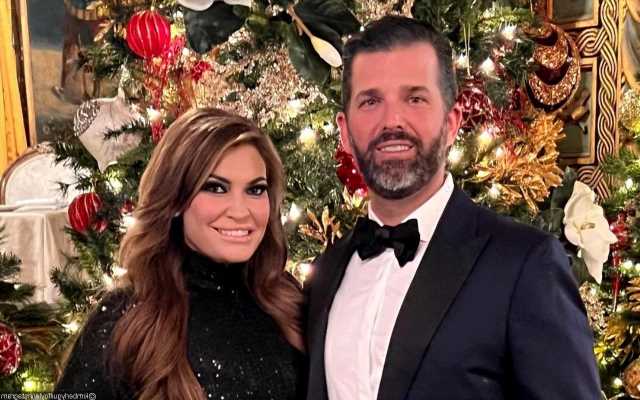 The former Fox News anchor showed off her engagement ring by sharing some photos of her and the eldest son of former president Donald Trump at his 44th birthday party.

AceShowbiz –Donald Trump Jr. and Kimberly Guilfoyle have been engaged. If a new report is to be believed, the eldest son of former president Donald Trump and the former Fox News anchor have been hiding engagement for a little over a year.

Offering more details about Donald and Kimberly’s relationship status was Daily Mail. A source told the outlet, “Don and Kim got engaged on New Year’s Eve 2020 – which is Don’s birthday. They’ve been together for almost four years now and have been friends for 15 years.”

“They’ve kept it private for the past year as they settled into life in Florida after moving from New York,” the source continued. “Both are focused on their children – they have six between them – and their work.”

“It’s been an open secret for the past 12 months with everyone Kim runs into admiring her almost 8 carat diamond engagement ring,” the informant added. “The chatter about the engagement has increased since the engagement ring was seen on Don and Kim’s Instagram accounts on New Year’s Eve.”

On Saturday, January 1, Kimberly shared on Instagram some photos of her and Donald in which she flashed the sparkler. In the snaps, she was seen rocking a sparkling black dress. Her fiance, meanwhile, donned a black suit.

“Tonight was extra special celebrating @donaldjtrumpjr’s birthday,” the 52-year-old TV personality wrote in the caption. “Don, you are strong, smart, courageous, funny and the love of my life. I can’t wait to spend the rest of our lives together. Love you.”

Kimberly and Donald began dating in 2018 after his ex-wife Vanessa, with whom he shares five children together, filed for divorce. Kimberly herself was previously married to current California Governor Gavin Newsom from 2001 to 2006. She later wed Eric Villency, with whom she shares one son. The marriage, however, also ended in divorce.