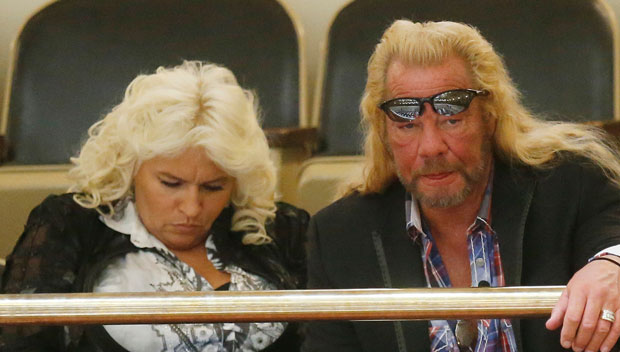 In the face of his wife’s cancer returning, Dog The Bounty Hunter says he’s trying to ‘keep everything positive,’ but he says that he’s heartbroken, and praying for a miracle.

“They say the cancer follows the path of least resistance, so it goes downward,” Dog The Bounty Hunter, 65, said when speaking with In Touch about his wife, Beth Chapman, 51, who is fighting throat cancer for the second time. Following her emergency hospitalization on Nov. 27, doctors found that Beth’s cancer had not only returned, but it had spread. “Half of her lung was full of water,” Dog (real name Duane Chapman) said.

“I have to keep faith,” Dog says. “ I am the leader of the family. She thinks she is, but I am. I have to keep it where I don’t have any doubts and keep everything positive. I love my honey so much, I don’t know what I’m gonna do… I’m like…I think I’m in a bad dream and I need to wake up. People keep saying to me, ‘Dog, are you OK?’ But I’m not the one who’s sick.” Dog also admitted that he prays a lot while dealing with his wife’s cancer, “and I cry all the time.”

Despite this grim prognosis, Beth is not letting it slow her down. “She’s trying to still advise me on my work,” Dog tells In Touch, “and I’m like, ‘Honey, I was Dog The Bounty Hunter before I met you, stay out of it.’ And she woke up the other night and told me, ‘You’re so damn stupid, if I die you’re going to lose the farm,’ and I said, ‘Beth, we don’t even have a farm.’ “

“I am going to be right here with her,” Dog tells In Touch. “First thing she when woke up from the [latest] surgery, she said, ‘Where’s the dog?’ and the nurse was confused. She said, ‘Did she bring her dog with her?” and I said, “yes, ma’am.’ I’m here every moment I can be for her.”

Doctors, who drained five ounces of fluid from Beth’s lungs, have recommended four to eight chemo sessions, beginning immediately, but the couple is looking into alternative therapy options. Against her doctor’s wishes, Beth left Los Angeles to return home to Colorado, where she prepares to fight for her life – again. “In the meantime,” a source EXCLUSIVELY tells HollywoodLife.com, “her spirits are high and she has put on a brave face as she battles a terrible situation. … It’s important to her that they all keep living, as she’s determined not to let this beat her.”