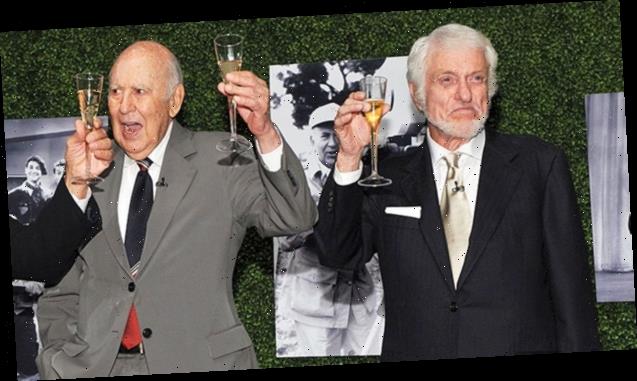 Dick Van Dyke paid tribute to his former collaborator Carl Reiner following the comedy legend’s death on June 29. The actor took to Twitter to express how Carl had a deep ‘understanding of the human condition’ and more.

Dick Van Dyke shared a moving statement about Carl Reiner following the death of the comedy legend from natural causes at the age of 98 years old. “My idol, Carl Reiner, wrote about the human comedy,” Van Dyke began his tweet. “He had a deeper understanding of the human condition, than I think even he was aware of.”

The equally legendary actor, 94, went on to share that Reiner was “kind, gentle, compassionate, empathetic and wise. His scripts were never just funny, they always had something to say about us.” The Mary Poppins actor shared a long, incredible history in show business with Reiner, who played a major role in launching the actor’s career as well as his co-star Mary Tyler Moore‘s.

Reiner created The Dick Van Dyke show and worked closely with the star between 1961-1966. Together, the pair worked on a total of 158 episodes, with Reiner serving as a writer for every single installment of the comedy show. The two continued to maintain a bond because of their work, and went on to be Hollywood dignitaries, revered for their decades of contributions to the arts.

Van Dyke’s sweet and sorrowful message comes after a number of stars shared statements to pay tribute to the comedy titan. “Carl Reiner made every room he walked into funnier, smarter, kinder. It all seemed so effortless,” actor George Clooney shared in a statement. “What an incredible gift he gave us all. His was a life well lived and we’re all the better for it. Rest in peace my friend.” The two worked together on Ocean’s Eleven in 2001.

Reiner’s own son, director Rob Reiner, also honored to his late father. “Last night my dad passed away. As I write this my heart is hurting. He was my guiding light.” Reiner passed on much of his love of film and TV to his son, who starred in All In The Family and went on to direct films, like When Harry Met Sally and The Princess Bride.

Over the course of his towering career, Carl Reiner won nine Emmy Awards, a number of which were for The Dick Van Dyke Show. His work spanned more than seven decades and earned him incredible acclaim and a place in the hearts, minds and memories of audiences everywhere. Along with Rob, he is survived by his children Lucas Reiner and Annie Reiner, as well as his grandchildren and great grandchildren.