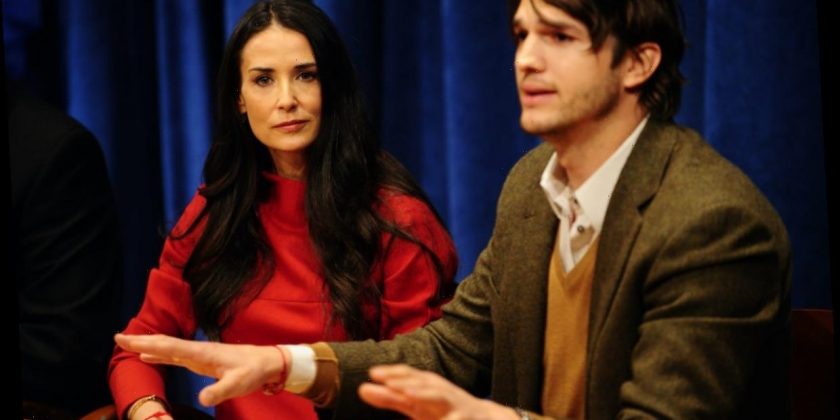 At first, Ashton Kutcher and Demi Moore seemed inseparable. But as their relationship progressed, Moore admits that she became “addicted” to Kutcher. As a result, the That ‘70s Show actor began to pull away. And while it’s normal for couples to require space from each other, Kutcher would make up lies in order to avoid his wife.

According to Moore’s memoir, things were terrific for the newlyweds at first. Kutcher was an incredibly loving husband during the first few years, and he’d always be there to shower her with affection.

He’d even leave little love notes for Moore around the house that said things like “Don’t forget you are magical” and “I love you.” Kutcher would take his wife on romantic getaways, covering the hotel rooms with rose pedal trails.

They seemed like a match made in heaven at first.

Yet things changed when alcohol came into the picture.

Moore had been sober for nearly 20 years, but that all came to a screeching halt after marrying Kutcher. According to Moore’s memoir, her young husband tried to convince her that alcoholism wasn’t a real thing and that it was all about moderation.

So to please her husband, Moore began drinking again. Sadly, when she would drink, she would get too drunk around Kutcher. Her drunken behavior made him furious, despite being the one “to push her in that direction,” as Moore puts it.

This left their relationship in turmoil.

As previously stated, Moore became addicted to Kutcher. This caused him to feel suffocated. He needed space from his wife, but he didn’t have the courage to tell her this. So instead, he made up lies to get away from her.

“Ashton was getting ready to do a movie called Spread,” Moore wrote. “It was clear from the script it would be very sexual- even graphic. Jennifer Jason Leigh was slated to play the female lead, and one day Ashton came home from the office and told me, ‘Jennifer is concerned about you being on set.’”

Because Moore and Leigh had the same manager, she called him up, frantic.

“Please let her know I’d never do anything to compromise the film, and I’d never want to make another actor uncomfortable while she’s working!” she said.

“My manager called her, then called me back,” she wrote. “‘Jennifer has absolutely no problem with any of this,” her manager told Moore. “She has no issue and had no idea what I was talking about.”

That’s when Moore realized that it wasn’t his co-star who wanted her off set. It was Kutcher, who was now going great lengths to avoid her.

“The bottom line was that she wasn’t worried about me being on set, he was.”

Demi Moore realized that Ashton Kutcher was dishonest with her

She said, “What he needed was space, and he hadn’t told me. He’d only been able to communicate what he wanted by dissembling. He wasn’t honest. That’s on him,” she wrote. “But I had made him the focus of all my attention and was putting too much pressure on him. I was losing myself. And that’s on me.”