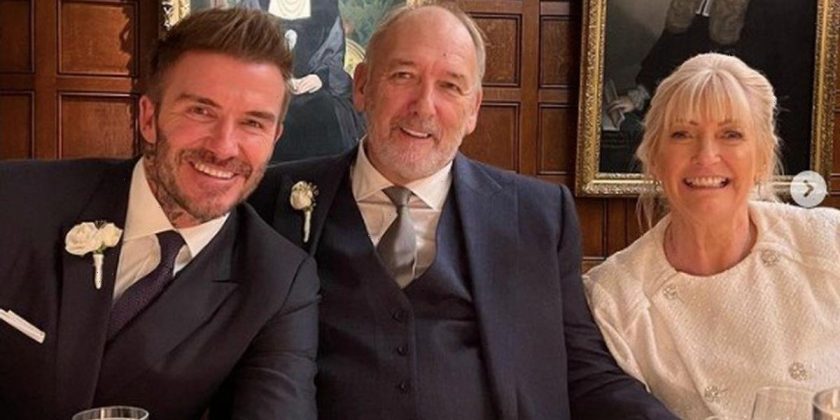 David Beckham has shared a sweet glimpse at his father Ted's winter wedding in London's law district of Temple on Saturday 11 December.

Ted, 73, exchanged vows with 62 year old millionaire solicitor Hilary Meredith during an intimate ceremony with all their family in attendance.

Taking to Instagram on Tuesday, David, 46, posted a collection of photos from the big day where he was dressed impeccably in a smart navy suit and reportedly served as best man for his father.

The pair wore matching suits and David was understandably beaming in the photos shared to his 69.9 million followers, which he captioned with: "Beautiful day celebrating my dad and Hillary’s wedding.

"Amazing to be together with all the family. So proud to be there for my dad like he’s always been there for me. Love you dad."

A spokesman for the family told MailOnline: "Ted and Hilary Beckham would like to confirm they were married on Saturday in a small private ceremony in London surrounded by immediate family including Ted’s 3 children and 8 grandchildren, Hilary’s mother and her daughter, Charlotte.

"Best man was Ted’s son, David. Bridesmaids Charlotte, Francesca and Harper looked beautiful in blue velvet dresses. The pair are currently honeymooning out of the country."

Ted and Hilary got engaged at the start of the pandemic in March 2020. Ted and Sandra, who is mum to toe footie legend, parted ways in 2002 after 33 years together.

Meanwhile, David's dapper appearance at the wedding comes after he was left with a bloody nose after his daughter Harper hit him when he tickled her.

David showed the injury as he grimaced for the camera.

"Note to self," David captioned over the top of the snap. "When tickling your daughter, don't put your nose near her mouth."

The sports pundit clearly saw the funny side of their rough and tumble mishap as he finished off the text with a wincing laughter emoji.