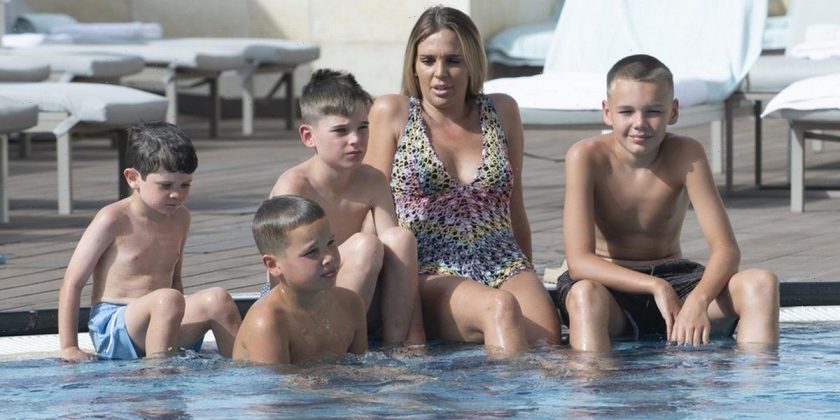 Danielle Lloyd has been pictured having a grand time with her four children in the pool ahead of celebrating her husband Michael O'Neill's birthday in Dubai.

The 38 year old, who recently revealed the "trauma" she felt of being dragged into the Wagatha Christie case, was seen looking gorgeous in a multicoloured one-piece swimsuit that featured a plunging neckline.

Styling her blonde mane straight to cascade over her back, the very tanned mum-of-five could be seen sitting with her legs in the hotel pool, enjoying the sunshine.

Danielle was joined by her sons Archie, 11, Harry, 10, and George, eight, who she has from her previous marriage to Jamie O'Hara.

Her two youngest children Ronnie, four, and nine month old baby daughter Autumn, who she shares with husband Michael, were also with her during the trip abroad.

Shortly after, Danielle swapped her swimsuit for a stunning black strapless dress that featured gold detailing and a thigh-high split, which she paired with some strappy heels.

With her hair down into loose waves, she posed smiling by the bar before telling her 551,000 followers it was "date night".

Danielle, who recently said the Wagatha Christie trial strengthened the Rooney marriage, then sat on a circular table with a pal and her other half Michael as they enjoyed an incredible show on stage.

One woman could be seen dancing in a sequinned jumpsuit that featured navy feathers all the way around her shoulders alongside a feathered headpiece.

Another performance saw several dancers in red sequinned outfits as a woman sang for the crowd, while a third show saw belly dancers take the stage.

A final performance saw a woman with flaming red hair use a circular prop to dance in the air to Michael Bublé's Cry Me A River.

Following a quick mirror selfie in the bathroom, the stunning star then posed alongside her hubby in the restaurant – where he could be seen posing in a white T-shirt that featured an emblazoned turtle, lobster and shark.

A final video from the night showed Michael pointing at a cake with a candle on top, shooing it all away. Over this, Danielle wrote: "When you don't want to admit it's your birthday," with two crying with laughter emojis before tagging him in the post.