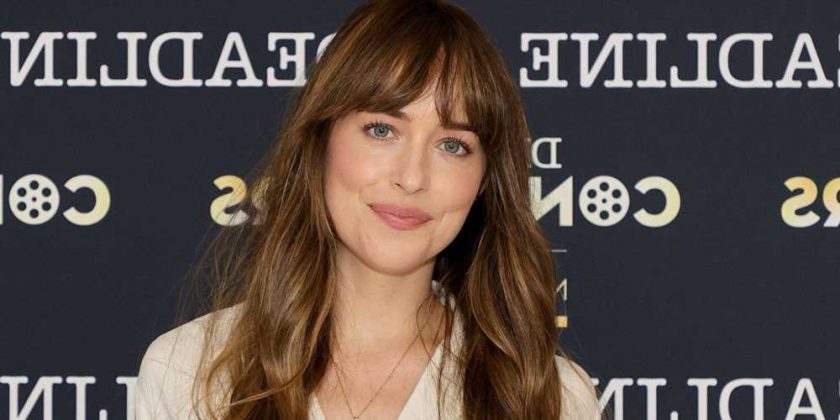 An LBD is always a fail-proof option to pull out of your closet, but Dakota Johnson just gave another wardrobe staple a go while walking the red carpet: the ever-versatile wrap dress.

On Saturday, the actress stepped out at the Deadline Contenders event in New York City to promote her new film The Lost Daughter, wearing a comfy chic robe-like dress. The cream-colored classic featured ruching on both the bodice and skirt, as well as a sexy slit up the side. Dakota paired the dress with simple black pumps that matched her manicure and a gold pendant necklace. Her hair was styled in loose waves accompanied by her signature fringe.

At the event, The Lost Daughter filmmaker Maggie Gyllenhaal and Johnson shared the stage and spoke about what attracted them to this particular project. "Elena Ferrante, who wrote the book that the film is based on, she really in all of her novels is telling the truth about things that I think for a really long time we've agreed not to talk about," said Gyllenhaal. "There's something inherently dramatic about telling the truth in general. Like, even when you tell the truth to a little kid – really the truth about something – and you see their eyes open up."

Johnson went on to explain that she was also intrigued by the honesty of her character, a young mother struggling with her responsibility as a parent. "The initial feeling was, 'Oh, I'm a little bit scared to play this young woman who's having a really difficult time as a mother,' because that is typically a very unlikable person," revealed Dakota. "But it's so normal and it's so honest, and it was someone that I recognized more than, you know, a young mother who gets everything perfect and is feeling great about it and super happy and all the time doesn't waver from that."