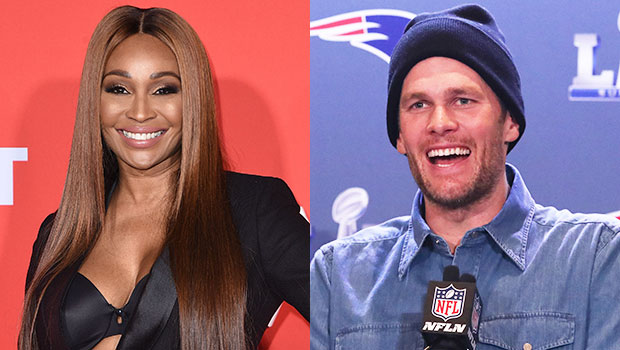 Honestly, anyone could make that mistake. ‘RHOA’ star Cynthia Bailey thought she met Tom Brady, but her bae, Fox Sports’ Mike Hill, had to break the bad news – while teasing the hell out of her!

During the excitement of the Super Bowl coming to your town, it’s easy to get caught up and think that any pale guy with blue eyes and a decent jawline is New England Patriots quarterback Tom Brady, 41. Such a fate happened to Cynthia Bailey, 51. The Real Housewives of Atlanta star shared a slightly embarrassing story to her Instagram on Feb. 3. “Confession. I ran into this guy last night in the lobby of the St. Regis. I asked for a picture because I thought he was [Tom Brady]. I really did.”

“I did interviews on the carpets last night saying how cool it was to bump into Tom Brady,” she added. Wait – making the mistake is one thing, but telling reporters about it is even worse! Oh, but it gets better, as Cynthia said she texted the picture to her bae, Fox Sports 1 newscaster Mike Hill, 48, to share the excitement of “meeting” the NFL legend. Mike’s reaction in itself is amazing.

“Baby…that’s not Tom Brady. Who told you that was Tom Brady? You didn’t post anything, did you?” asked Mike. You can just hear him losing it, especially after Cynthia said she told people on the red carpet that she ran into him. “LMAO…I’m gonna need you….as your SPORTSCASTER boyfriend…NOT to not know ho Tom Brady Is.” Look, that right there was probably the best thing about the whole Super Bowl (the “meh” of a halftime show certainly didn’t elicit such an emotional reaction as Cynthia’s Brady mix-up.)

Though, despite this embarrassing moment, Cynthia took it in stride. She was big enough to admit to her 2.2 million followers that she fangirled for the wrong dude. “Looking back now at the picture, ok maybe he is not Tom’s long lost twin. But he could be his cousin right or nah? What y’all think? #superbowl2019 #happysuperbowl2019day #atlanta #tombrady #mefanningout #meandtombrady

Gisele Bundchen, 38, had some love for the real Tom following the Patriots’ Super Bowl win. “Your tireless commitment, discipline and hard work never [ceases] to amaze me. We love you!” she wrote on Instagram on Feb. 4. The supermodel shared a picture to her IG, and unlike Cynthia, it was of the real Brady. Though, you never know. There’s a “Tom-pelganger” out there.