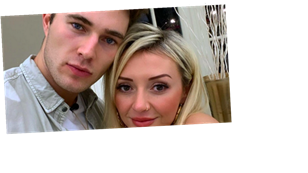 Curtis Pritchard, who is starring on the latest series of Celebs Go Dating, confessed Kimberly Hart-Simpson is an “absolute legend” after he sparked romance rumours when he was spotted lying next to the Coronation Street actress in the Channel 4 show’s mansion.

The Love Island star, 24, who felt betrayed by his ex-girlfriend Maura Higgins and former co-star Chris Taylor since they made their relationship official, has revealed he can tell Kimberly, 33, everything, including his “secrets”.

“I did get on really well with Kimberly. It was great that I got the chance to live with her. Kimberly is an absolute legend,” he shared.

"She is just a good laugh. In every way. You can just talk to somebody. She is really really down to earth and easy, that's Kimberly.”

Curtis went on to reveal more about his developing bond with Kimberly, who played Nicky Wheatley in Corrie this year.

“You know when there's somebody that you just click with and you can feel like you can tell your secrets to somebody? That's what Kimberly is,” he admitted to The Sun.

"You feel like you can talk to her on a deep level. I really did click with her and she is a smashing girl."

It comes after Curtis hinted he has moved on from his high-profile romance with Maura, which ended in March, as he confessed to missing Kimberly's face in the mornings.

Alongside a picture of the loved-up pair snuggled up together, he wrote on Instagram: “Kimberly is the best!!!

"Waking up and not seeing your face in the bed next to me this morning just didn’t feel right."

After his former flame Maura and Chris confirmed their new romance and announced they had fallen in love on Instagram last month, Curtis admitted he felt "hurt" by the news.

"I feel betrayed by them both — two people I was very close to," he told the same publication.

"When I saw the pictures, I’d be lying if I said I didn’t feel hurt. I was upset. How long has this truly been going on for?"

Curtis and Kimberly will be set up on many dates with the public alongside Geordie Shore’s Chloe Ferry, Strictly Come Dancing star Karim Zeroual, Made In Chelsea’s Sophie Hermann, DJ Tom Zanetti and Wayne Lineker for the latest series of Celebs Go Dating.