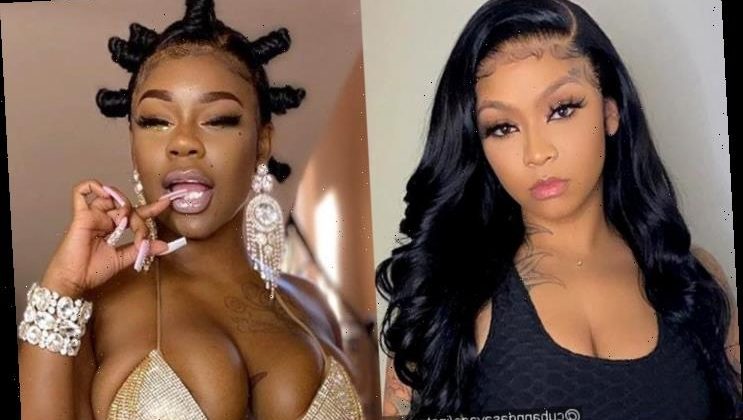 Catching wind of Suki’s claims, Cuban quickly hit back at the ‘Love and Hip Hop: Miami’ star, saying on Twitter that Suki is ‘obsessed’ with her and urging her to stop lying.

AceShowbiz –Cuban Doll and Sukihana are still going at it on Twitter. The two rappers were taking jabs at each other on the blue bird app after Suki Hana slammed Cuban on her Twitter page on Thursday, September 17, calling her “colorist.”

“Cuban doll calls any girl that is darkskin ugly. You are colorist. All black women are pretty. We the people are tired of your a**,” so Suki wrote. When a fan asked her what actually happened, Suki explained, “She posted me for no reason calling me ugly and fat. She’s been doing this for a long time. This is not high school stop being mean to other girls just because your angry with your life.”

Instead of shutting up, Suki continued to shade Cuban with an Instagram post in which she appeared to liken Cuban to “mean girls in high school.” She wrote in the caption, “The face they make when they are upset that you are winning. She has never smiled, always mean putting random women down. These girls never been your real friends. The same mean girls in high school that ruined your whole school year with rumors that’s her.”

Suki added, “Sis the tables always turn and it Clearly shows. for you to betray so many women you should be ashamed. Karma doing her job.” She also suggested that Cuban should be canceled, tweeting, “Any b***h that doesn’t empower women needs to be canceled.”

Cuban, meanwhile, didn’t let it the slandering slide. “I’ve been empowering girls b4 it was a thing b***h Sdfu you lien a** b***h.” She later went on a Twitter tirade in which she calling Suki names, adding, “Asian is obsessed with me on god ! B***hes wanna turn everybody against me I understand you can’t stand me. You b***es need a crowd I’ll stand alone on god.”