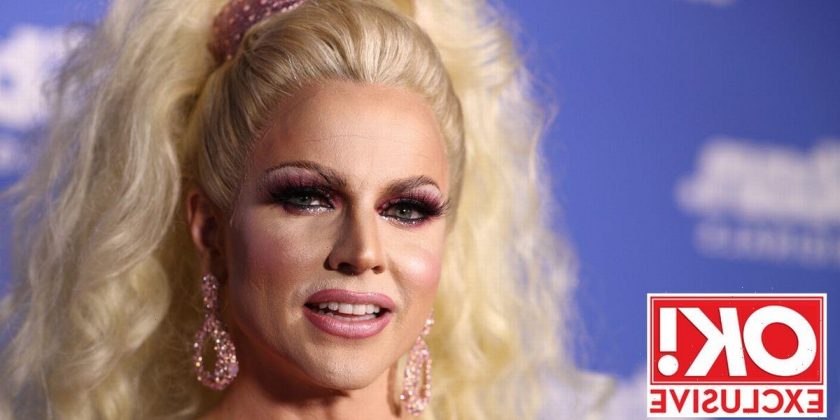 Courtney Act is busy signing copies of her memoir, Caught In The Act, when she picks up the phone to OK!. She tells us she has just personalised one to send to former Tory MP Ann Widdecombe, who she famously clashed with on Celebrity Big Brother in 2018.

“I hope she’s wearing pearls so she can clutch them while reading about my sex stories,” she laughs, in her unmistakable Australian twang.

And while it does contain details of 40-year-old Courtney’s wild nights out on the Sydney gay scene, her memoir also offers fans an insight into the highs and lows of the making of the drag superstar – real name Shane Jenek – who finished as runner-up on the sixth season of RuPaul’s Drag Race in 2014.

The star first found fame in 2003 when she auditioned for the first season of Australian Idol as Shane, being turned away and returning the next day as Courtney, then sailing through to the semi-finals.

She then signed a record deal and was branded “the third Hilton sister” after striking up friendships with Paris and Nicky Hilton.

But when her debut single crashed out of the Australian singles charts after peaking at number 29, plans for an album were shelved and she found herself thrust back into obscurity.

“As you get older you look back on the different experiences in your life and think, ‘My story didn’t end there, it kept going and actually it got better,’” she tells us, as she reflects on her decision to move to the US and compete on Drag Race.

Here, Courtney lifts the lid on writing her life story, opens up about CBB flirt Andrew Brady, and reveals what she thinks of RuPaul…

Hi, Courtney! How did you find writing your memoir?

It was definitely cathartic. It was the most deep childhood regression therapy of my life. For example, my first kiss with a boy is like a cute little happy memory. But as I was writing about it, I just started breaking down sobbing because for the 18 years that came before that, where I didn’t understand who I was, I didn’t understand anything about queer identity. There was such shame and such silence surrounding it. Writing my book was a real form of therapy.

I can’t even imagine. It’s so weird to think about because I was just so naturally drawn to drag. It was fun and it was expressive and it was performative and it was glamour and it was all of the things that I grew up loving. I rocked up to the Australian Idol open call one day as Shane and I got knocked back and I went the next day as Courtney. Drag enabled me to create opportunities where there weren’t any and carve out a career for myself.

What was life like for you at 21 after Australian Idol?

I had just been on a huge TV show, I had signed a record deal, I was hanging out with Paris Hilton and I was just like, “This is it! I’ve made it, I’ve finally made it.” And then the record label didn’t take me up on the option of an album, the Idol juggernaut moves on, Paris goes back to LA, and you’re left with reality. But I’m weirdly really glad that happened because it helped me to discover who I was.

Are you and Paris still in touch?

No, it was 20 years ago now. If I went up to her I would just sound like a weird fangirl.

In the book you speak of your disappointment at how you were perceived on RuPaul’s Drag Race. How long did it take to accept the edit you received?

Accepting the edit is something I’m detached from now. But it does make you wonder what really happened, what the truth was. But I have come to peace with it.

You say you didn’t feel you had a human connection with RuPaul. He has since blocked you on Twitter. Is there a feud?

He is an icon, I grew up loving RuPaul, he doesn’t have to be friends with me. I was on his television show and I have got this amazing career that definitely jumped off from that, but I think there is some hypocrisy. Every episode he says, “Everybody say love,” “I am your family,” but that is something that I didn’t feel. I still love watching Drag Race – I just separate that experience.

The UK fell in love with you on Celebrity Big Brother. How was it living with Ann Widdecombe?

We were as diametrically opposed as you could possibly be, but even though I knew I wasn’t going to change Ann’s opinions of me, we were able to have moderate conversations and discussions about issues. I think that’s what the world is missing right now.

You had a close relationship with Andrew Brady on CBB. Do you carry a torch for him?

At the time there was definitely an attraction and excitement, but ultimately there is no flame. But he is very sweet and I wish him well.

Caught In The Act by Shane Jenek aka Courtney Act (Pantera Press, £19.99) is out to buy now