CHRISTOPHER STEVENS reviews the weekend’s TV: All together now! For goodness sake, do the hippy hippy rake!

The Chelsea Flower Show runs all this week, with daily coverage of its elegant pavilions on both BBC1 and BBC2.

This might create the impression that gardening is a genteel pastime, best suited to those of a placid temperament. The Great Garden Revolution (C4) sets out to correct that misconception.

Gardening, it turns out, is cooler than Wim Hof’s ice lolly and hipper than a hippie doing the Hippy Hippy Shake.

This backyard makeover show, returning for a second series, is a kind of horticultural Top Gear, with three blokes rolling up their sleeves for some loud and lairy garden action. 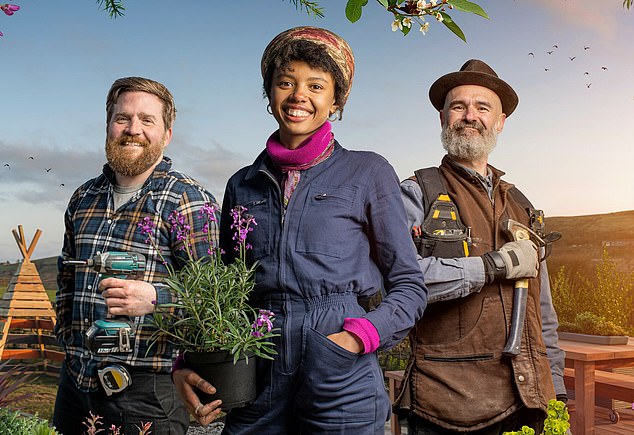 The Great Garden Revolution (C4) sets out to correct that misconception. Gardening, it turns out, is cooler than Wim Hof’s ice lolly and hipper than a hippie doing the Hippy Hippy Shake

Designer Joel Bird is in charge, wearing a sheepskin coat and a Homburg hat. The hat is slightly too small, as if Joel’s trying to look like the lead singer in Madness but ended up as Arthur Daley instead.

Bruce Kenneth showed us how to build a ‘firepit’ or outdoor burner using the drum from a washing machine. Just unbolt the metal barrel from the middle of your appliance, turn it on its side, fill it with wood and set fire to it.

You won’t be able to wash your clothes any more but, now that you’re a true hippie, you don’t need to.

Errol Reuben Fernandes gave us a mind-blowing tip on how to lay out a gravel path when your whole back garden is covered in gravel.

First, paint a wavy line from the back door to the garden wall. Then place boulders on either side of the wavy line. Finally — and this is genius — rake bags of fine gravel over the existing gravel, along the painted line.

Errol tells us that this is no ordinary path. It’s a sensory path . . . man.

All this is as rock ’n’ roll as Spinal Tap — though devotees of that spoof rockumentary might recall that one of their early drummers, Stumpy, died in a ‘bizarre gardening accident’.

The drummer with American rockers Toto and Steely Dan, Jeff Porcaro, also died following a catastrophic mishap in his garden, when he inhaled insecticide. He suffered a fatal heart attack.

If Joel, Errol and Bruce have inspired you to tie on a bandana and get rocking in the garden, be careful out there.

For the fugitives in Hunted (C4), on the run from security services with access to every CCTV camera and mobile phone mast in Britain, everywhere is dangerous.

But for some of them, the greatest danger is their own stupidity.

I’ve warmed to Amarinder, a dentist who has brought his mum Shoba along to help him evade capture.

Amarinder is so vain, he dyes his stubbly beard with a mascara brush. He hopes his A-level in geography will prove invaluable but, when he and his fellow escapees were set loose on the Isle of Wight, he thought Cowes was the cattle market.

Somehow, Amarinder and Shoba have made it as far as Birmingham, where they persuaded a relative to drive them out of the city. Spying green fields, Amarinder shouted, ‘Look! Countryside!’ ‘That’s the cemetery,’ sighed his cousin.

They are doing better than lovebirds Meurig and Elinor, who were hampered by their need to hold hands wherever they ran. They drew money out of a cashpoint, a sure way to draw attention, and then headed for Meurig’s sister’s house.

When the hunters turned up, Elinor tried to escape by sprinting around the rotary clothesline in the garden. A headless chicken might have devised a better plan.

If the others match that level of incompetence, this series promises to be great fun. The show continues tonight, by which time they might all be caught.

Guilty pleasure of the weekend: Leonardo (Drama) is now on Freeview. Starring Poldark’s Aidan Turner as the artist and Matilda de Angelis as his barely dressed muse, it’s art history dipped in chocolate and consumed in a bubble bath.