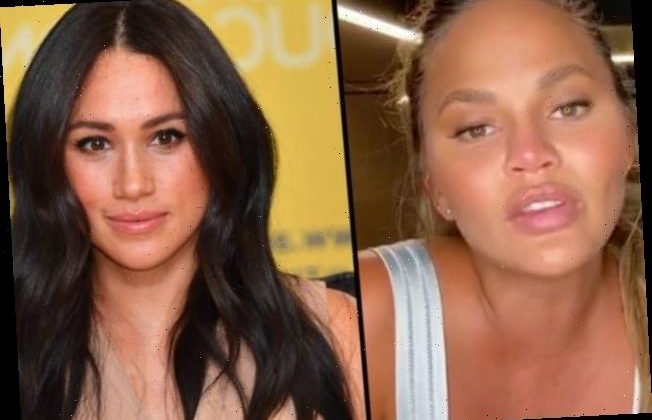 Very sadly, it has come to this on the Internet:

… after the former actress revealed to the world that she suffered a miscarriage this summer.

The ex-Duchess of Sussex made this very personal reveal in a New York Times op-ed shortly before Thanksgiving.

Prior to this article, which detailed the way in which Markle discovered this horrible news, neither she nor husband Prince Harry had told the public they were expecting a second child.

“I dropped to the floor with him [my son] in my arms, humming a lullaby to keep us both calm, the cheerful tune a stark contrast to my sense that something was not right.”

Tragically, Markle continued, opening up for all to see:

“I knew, as I clutched my firstborn child, that I was losing my second.”

The stuff of nightmares. Truly.

Markle went on to say she went to the hospital with her husband, referencing how she and Harry felt at the time as follows:

“I felt the clamminess of his palm and kissed his knuckles, wet from both our tears. Staring at the cold white walls, my eyes glazed over. I tried to imagine how we’d heal.”

Somehow, this vulnerable admission prompted a Twitter to slammed Markle for writing “a 1,000-word op-ed about herself” on Wednesday.

This then prompted Teign to jump in and reply;

In early October, Teigen shared the pain of her own miscarriage with the world.

She speaks out here from experience.

She went on to write that she has not been tweeting much lately because she is “in a bit of a grief depression hole.”

Concluded Teigen, despite not owing anyone an apology at all:

“Do not worry as I have so much help around me to get better and I’ll be fixed soon.

“They’ll call when I’m better and ready for pickup and u can swing by and grab me OK? Thank u and love you!”

Teigen and husband John Legend revealed this fall that they had lost son Jack 20 weeks into the pregnancy.

The couple also dealt with social media idiots after posting about their own tragic pregnancy loss.

They appeared on Good Morning America on Tuesday, November 24 for their first joint interview since announcing the terrible development.

“I definitely give myself permission to have complete and utter grief,” Teigen said on air, adding:

“Every day is so different. So when people ask me how I’m doing, I always say, ‘I’m OK today.'”

Markle, who shares 18-month old son Archie with Harrry, explained in her essay for The New York Times that she considered sharing her experience a step “toward healing.”

Losing a child means carrying an almost unbearable grief, experienced by many but talked about by a few.

“We have learned that when people ask how any of us are doing, and when they really listen to the answer, with an open heart and mind, the load of grief often becomes lighter — for all of us.”

Harry, of course, supported his wife’s decision to go public about the miscarriage.

“In being invited to share our pain, together we take the first steps toward healing.”

We continue to keep Teigen and Markle in our thoughts.

35 Stars Who Have Suffered a MiscarriageStart Gallery