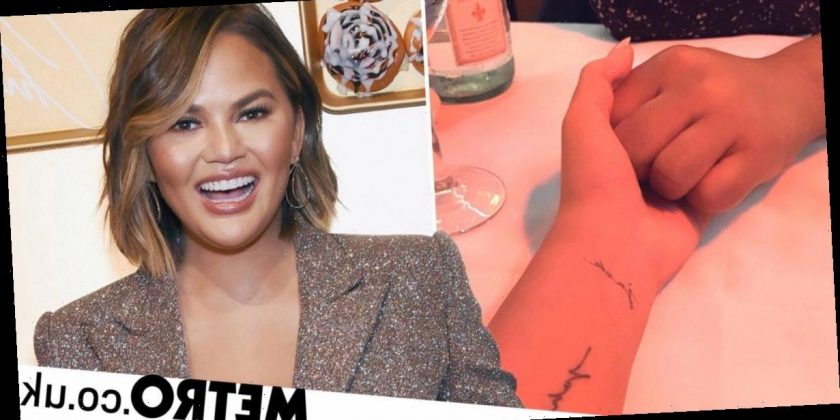 Chrissy Teigen has created a tribute for her son Jack by getting a tattoo of his name following his heartbreaking death.

The Lip Sync Battle host suffered a miscarriage in September just 20 weeks into her pregnancy.

Now as she continues to grieve the death of her baby boy, Chrissy has found a way to keep Jack’s memory alive.

During a date night with husband John Legend, 41, on Saturday, Chrissy shared a photo of them holding hands with her new tattoo visible. She now has Jack’s name tattooed on her wrist just below the previous ink of John’s name alongside their children’s Luna and Miles.

It comes days after Chrissy, 34, wrote a heartfelt open letter detailing her grief and explaining why she documented the immediate aftermath of Jack’s death through photos on social media.

In the essay, the former model explained: ‘I had asked my mom and John to take pictures, no matter how uncomfortable it was. I explained to a very hesitant John that I needed them, and that I did NOT want to have to ever ask. That he just had to do it.

‘He hated it. I could tell. It didn’t make sense to him at the time.’

‘I lived it, I chose to do it, and more than anything, these photos aren’t for anyone but the people who have lived this or are curious enough to wonder what something like this is like. These photos are only for the people who need them. The thoughts of others do not matter to me.’

Chrissy had been rushed to hospital last month after experiencing abnormal bleeding.

She underwent several blood transfusions but doctors eventually broke the news that Jack would not survive.

Over the weekend, Chrissy has kept busy by dressing up for Halloween with Luna, four, and Miles, two.

For emotional support, you can contact Miscarriage Association’s pregnancy loss helpline on 01924 200799 or email [email protected]