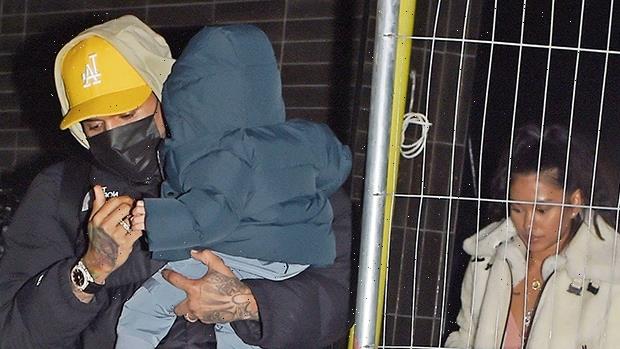 The R&B singer shared an adorable photo of his son, looking like his real mini-me, while the little one bundled up for winter.

Chris Brown‘s son Aeko, 2, really is an adorable little “heartbreaker.” The 32-year-old “No Guidance” singer posted thee photo of his boy dressed up just like his dad on Instagram on Tuesday December 21. Aeko totally took after his dad, and looked like a mini-version of his old man, as he stared into the camera for the pair of photos. It was a super sweet photo to show his love for his son.

Aeko looked totally stylish in his winter-appropriate outfit. He sported a brown beanie over his adorable face. He also rocked a light blue puffy jacket and a beige and green flannel under it. In the second photo, he showed his outfit was complete with beige sweatpants and a tiny pair of sneakers. It also looked like he had a pair of gloves shoved in his pocket.

Other than Aeko, Chris also has one daughter Royalty, 7, who he shares with his ex Nia Guzman. Chris shares Aeko with model Ammika Harris. The same day he shared the photo of Aeko, Chris also posted a sweet daddy-daughter moment that he had with his daughter where she wrapped her arms around him and hung onto his back. Chris tagged his daughter and included a heart emoji.

Aeko’s mom has shown off her son’s style with a sweet portrait of the two of them, where the toddler rocked a man bun and sported a white sweater. Even though Chris and Ammika may not be together, it sounds like they have a solid co-parenting relationship. She lives in Germany with Aeko, but the singer has made a point to spend time with his boy whenever he can. He was seen spending time with Aeko when he performed a concert in London in November. “It was so important to Chris to [spend] bonding time with his son since he just had a birthday last month and now the holiday season is upon us,” a source revealed to HollywoodLife exclusively at the time. “Chris is having the time of his life in London with Aeko. He can’t believe how much he looks like him.”