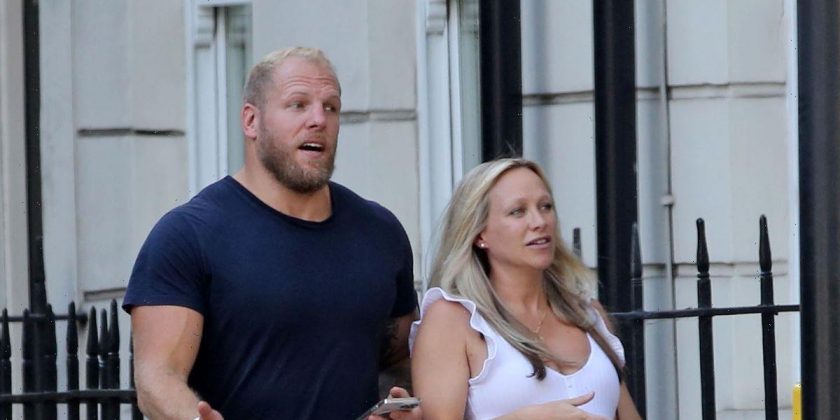 Pregnant Chloe Madeley has been pictured enjoying a day date with her husband James Haskell, as she patiently awaits the arrival of her baby girl.

The 35 year old daughter of British TV presenters Richard Madeley and Judy Finnigan, was originally due on August 5, but has been mooching around London with her family for much of the week, dressing her blossoming bump on an array of sweet outfits.

And in most recent snaps, Chloe shone with her pregnancy glow as she showed off her baby bump in a form-fitting white dress which featured frilled sleeves and a slit at the legs, which she paired with some comfy pink sliders.

She opted for a natural makeup look and let her long blonde hair flow loose around her shoulders as she chatted away to James, often cradling and touching her bump.

James, 37, coordinated his look perfectly with that of his wife, in a pair of bright white shorts, a navy t-shirt and trainers.

Chloe announced her pregnancy in February, whilst simultaneously revealing that she was expecting a baby girl.

She announced that she was pregnant with a sweet video featuring a number of ultrasounds that were taken as her baby grew.

On the same day, she also posted an image of herself with her mother, Judy, whilst holding up a pink fleece teddy baby grow, revealing that her “little one” is a girl.

Chloe's father, Good Morning Britain presenter Richard Madeley, recently gave an update on his daughter's pregnancy, saying that she was "ready to pop".

He was congratulating guest Kevin Maguire, who has welcomed a new granddaughter this weekend, and couldn't resist sharing his joy as he awaits the arrival of his own grandchild.

He said: "My daughter Chloe is pregnant and ready to pop any second now really".

Richard made an appearance on ITV's Loose Women in June, when he confirmed Chloe's due date, saying: "Chloe was due on 5th August and they’ve moved it to 7th, they’re in France right now, coming up to 34 weeks – she’s having a little girl."

Fitness enthusiast Chloe recently spoke about how she is looking forward to getting her pre-pregnancy body back after the birth of her first child.

She posted a fully-naked photo of herself, with her bump on full display, as she enjoyed a holiday a few months earlier.

Alongside the snap, she wrote: "I am extremely excited to rehab my body postnatally; my core, my pelvic floor, my glutes, everything that has had to shift, make way and change for my little potato will need to be rehabbed and nursed back to health. I am excited to PATIENTLY watch my physique change again, too."

Referring to her career in fitness, Chloe said: "I work in the body. I have done for a decade. I’ve been passionate about it for longer than that. It was that passion that saw me change my career, my lifestyle, my body and my mental health.