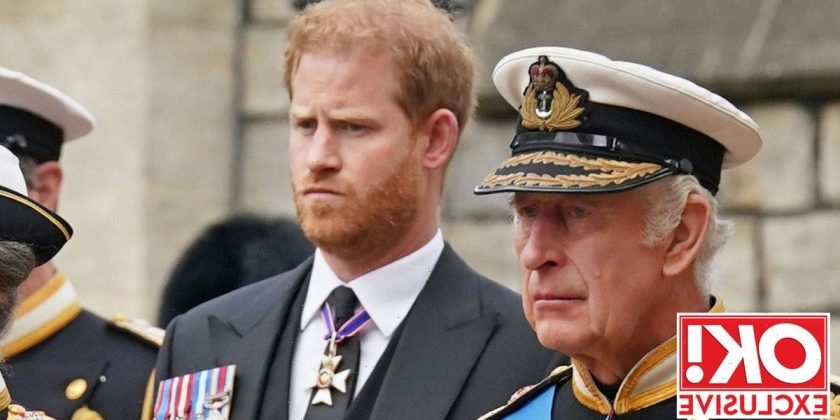 King Charles is yet to publicly respond to Prince Harry's controversial Netflix series, the first three episodes of which aired last Thursday and have taken over global news headlines ever since.

With the next triple instalment scheduled for this coming Thursday (15 December), former BBC royal correspondent Jennie Bond believes the monarch is "unlikely" to address the claims his son and wife Meghan Markle have made against The Firm.

"The three words that come to mind when I consider how the Royal Family must be feeling during the run up to the release of the next three episodes are despairing, dismayed and disappointed," Jennie tells OK!

"They’ll be hurt and pained. Charles must be distraught that this is going on and on." And Jennie believes The King will keep his cards close to his chest when it comes to the widely-publicised series unless his wife, the Queen Consort's behaviour is brought into question.

"It’s really unlikely Charles will respond to Harry and Meghan’s documentary unless there is a direct hit on Camilla.

"He and his staff are well aware that if you comment on a story, it gives it legs. The best way to shut it down is silence. And Charles probably believes it more graceful and dignified to respond, if he’s going to, in private.

"You’d hope by now he’d have picked up the phone to Harry and said ‘Look son, why are you doing this?’. It was only recently that he referred to Harry as his ‘darling boy’. He must feel so hurt." The Duke of Sussex, 38, and Duchess Meghan, 41, dropped a number of relatively mild "bombshells" during the first three episodes of the docu-series.

As well as reflecting on their discrepancies with the paparazzi, the couple reported feeling "unsafe" when working as Royals, later claiming they they weren't "allowed to tell our story because they didn’t want it".

Harry also claimed his wife had given up "the freedom that she had to join me in my world", and that when they became concerned about Meghan's treatment he was told to remain quiet.

"Members of the royal family declined to comment on the content within this series," is the message displayed at the start of the episodes. Neither Buckingham Palace, Kensington Palace nor any member of the family were approached for comment on the content of the Duke and Duchess of Sussex’s Netflix series, it is understood.

It has been suggested that representatives for Buckingham Palace and Kensington Palace, as well as the royals themselves, were not offered the opportunity to reply to the raft of accusations lodged against them across the first three episodes of the hotly anticipated series, which landed on screens this morning.

But with the next three episodes on the horizon, Jennie admits she'll be "looking for evidence, once again" of the reported negligence and abuse they received at the hands of the Royal Family.

"I’m sure like me, they’d like to hear more detail about what Harry and Meghan are accusing them of," Jennie explains. "It’s so hard to get to the bottom of. "We’ve got sources from the palace denying having done any harm to Harry and Meghan – we can’t determine who is telling the truth.

"So, I think the onus has to be on Harry and Meghan who are making the allegations to stand them up and stop throwing out general slurs against their family. It’s getting really unpleasant and dirty. Harry talked about it being a ‘dirty game’, well this is dirty."

She continues: "We’ve seen so much of the Royal Family’s dirty laundry aired in public and this is a whole lot more. Can’t they sort this out privately?

"You can’t throw these accusations out without evidence, and there was very scant evidence in the first three episodes to backup their claims. Harry and Meghan need to come up with a few examples and we will give it due consideration."