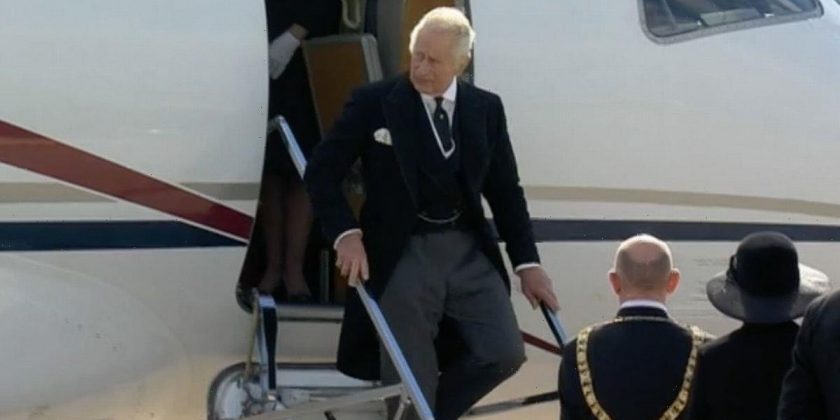 King Charles III and Queen Consort Camilla have arrived in Edinburgh after flying to the Scottish Capital from London today, Monday 12 September.

The royals arrived in Edinburgh to take part in the emotional procession that will see the Queen’s coffin taken from Holyroodhouse to St Giles’ Cathedral.

Other members of the Royal Family will also travel to Edinburgh alongside Charles to walk on foot behind the coffin.

Once they’ve reached the Cathedral, there will be a service for the late 96 year old monarch to celebrate her life and her connections to Scotland.

The Queen will then lie in rest until tomorrow afternoon, Tuesday 13 September. From 5pm today, the Cathedral will be open to the public so mourners can pay their respect.

There will be a queuing system in place as well as strict security checks – with a restriction on mobile phones as well as photography and recording being strictly prohibited.

Lord Lieutenant of Edinburgh, Robert Aldridge, has described the events to pay tribute to the Queen as “truly historic”.

"The news of Her Majesty The Queen's passing has been met with great sadness around the world and has been greeted with an outpouring of emotion that reflects how highly regarded she was at home and abroad,” he said, as perDaily Record.

For all of the latest updates, sign up for OK!'s Royal newsletter.

"I'm preparing to warmly welcome King Charles and royal family members and of course to express deepest sympathy on behalf of the city.

"The next few days will be truly historic for Edinburgh, with tens of thousands of people descending to pay their respects and millions more across the world tuning into the broadcast coverage.

"I believe Scotland can take real pride that Her Majesty cherished her time here and now the eyes of the world will be upon the Capital as we unite in national mourning and herald our new King.”

Charles and Camilla’s trip to Scotland comes just hours after the King addressed Parliament for the first time as monarch.

Speaking to those in attendance, Charles admitted to feeling "the weight of history" in the days that have followed the Queen's death.

He began: "As I stand before you today, I cannot help but feel the weight of history which surrounds us and which reminds us of the vital parliamentary traditions to which members of both Houses dedicate yourselves with such personal commitment, for the betterment of us all.”

The King went on to thank MPs and peers for their messages, saying: “I am deeply grateful for the addresses of condolence.”

He said the addresses “touchingly encompass what our late sovereign, my beloved mother the Queen, meant to us all”.