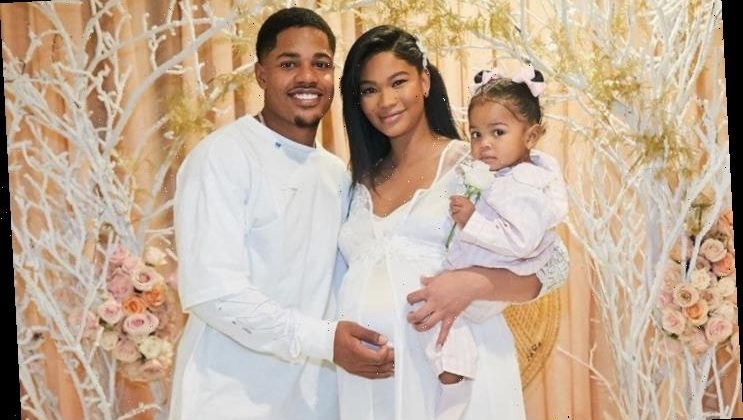 Chanel and Sterling Shepard previously announced that they’re expecting their second child in August on Instagram, posting a picture of her showing off her baby bump in a white crop top.

AceShowbiz –Chanel Iman and husband Sterling Shepard are going to be parents of two beautiful daughters. The model took to Instagram on Sunday, December 1 to share to her online devotees that her baby No. 2 would be another little girl.

She shared a picture of her, Sterling and daughter Cali Clay (1) twinning in white for the winter wonderland-themed baby shower for the unborn baby. “Blessed with another baby girl on the way,” she captioned the photo before adding two ribbon emojis.

In another post, the 29-year-old model and Cali looked adorable in pink pajama sets. “Mommy of two,” so Chanel said.

It was said that the guests at her baby shower were welcomed to the party with custom pink pajama sets and cozy, over-the-top hot chocolate. The shower also luxe treatments for the crowd, as well as a little R&R for Iman herself.

The baby shower arrived just in time of the Victoria’s Secret Angel’s 29th birthday on Sunday. Her husband took to the photo-sharing site to give a sweet birthday message for her. “Happy birthday to my beautiful wife and the mother of my children.. Who I do it for!” her New York Giant husband wrote alongside a picture of her and baby Cali.

Chanel and Sterling announced that they’re expecting their second child in August. Alongside a picture of her showing off her baby bump in a white crop top, she wrote on Instagram on August 26, “Excited to announce we will be a family of four soon.”

The pregnancy rumors first sparked she was photographed on Tuesday, August 20 strolling the streets while sporting what appeared to be a baby bump. Her belly was noticeably bigger than usual as she covered it up with an off-the-shoulder stripped blue-and-white dress. She paired it up with white sneakers and let her raven hair down.

Chanel and Sterling started dating in 2016 before taking their relationship to the next level two years later. Months after their engagement, the couple tied the knot at the Beverly Hills Hotel in March 2018 and welcomed their first child together in August of that same year.