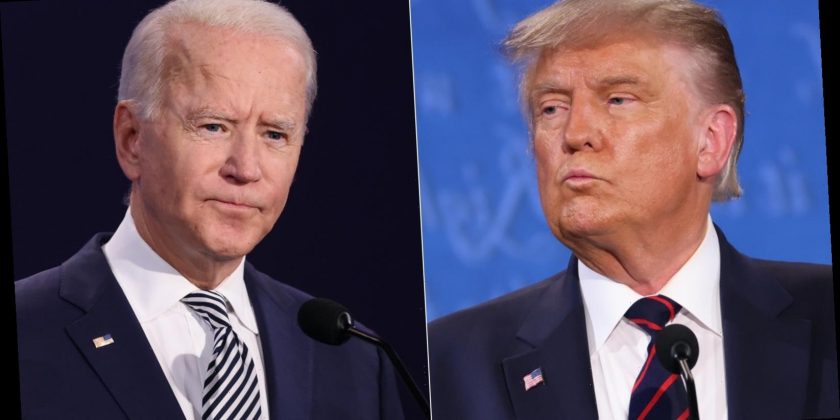 Everything about the 2020 election has people talking, and the first presidential debate on Sept. 29, 2020 in Cleveland, Ohio, was definitely no different. In the first debate of the election season, Democratic presidential nominee Joe Biden went toe-to-toe with President Donald Trump on six topics: candidates’ records, the Supreme Court, COVID-19, the economy, race and violence, and election integrity.

As both candidates shared their views on each topic, many people on social media also chimed in with opinions, as to be expected. And while Twitter as a whole watched with rapt attention and tweeted their many, many thoughts, celebrities couldn’t help but weighed in, as well. They took to their huge platforms to share funny thoughts they had while sitting at home watching the presidential candidates, and many shared frustration with the debate as the night went on. Ahead, check out some of the reactions celebrities shared on Twitter, from the angry to the funny and everything in between.

Celebrities are livid at Donald Trump talking over Joe Biden

It didn’t take very long for Twitter to start yelling at their TVs and computers over the debate. Right at the top of the debate, President Donald Trump and former vice president Joe Biden went in on each other, but it was obvious right from the start that Trump wasn’t going to make it easy on moderator Chris Wallace. While debating candidate records, Trump actually started arguing with Wallace, at which point Wallace noted that he wasn’t the one involved in this debate and not-so-gently reminded the president that he was the moderator and Trump should not talk over him — a comment that got Twitter going.

Celebrities on Twitter contributed snarky comments about Trump’s behavior. Actor Devon Sawa had one of the most succinct tweets at the start of the debate, quite simply calling Trump a “f**king a**hole.” Fellow actor Michael Malarky chimed in, saying that he’d already had enough not even half hour into the debate, while Zach Braff was already reaching for a drink over what was happening at the debate. Aisha Tyler couldn’t get over Trump arguing with Wallace either. They, like many others across the country, seemed to be hate-watching the debate, because while these viewpoints were important for voters to hear, all the arguing made it rather difficult to watch.

Andy Cohen begged for a mute button during the debate

Funnyman Andy Cohen live tweeted the entire debate, letting his humor shine through his disbelief over what was happening on the Cleveland, Ohio stage. Cohen, who has publicly supported former vice president Joe Biden, started the night by cracking a joke about the amount of self-tanner on stage, which you can take to mean whatever you’d like. It was downhill from there for Cohen, who quickly became fed up with President Donald Trump talking over not just Biden, but moderator Chris Wallace, as well. He tweeted, “PRESS THE MUTE BUTTON ON THIS D**KWEED,” followed by a GIF of himself from his show, Watch What Happens Live, slamming a “mute” button.

Oh, but he didn’t stop there. Cohen then understandably turned to alcohol as Trump and Biden’s voices grew louder during the debate as they took on deeper topics like COVID-19 and racism. He tweeted, “I do not have enough wine in the house to get me through this s**tshow.” He also retweeted a tweet calling Biden’s patience on stage “presidential.”

Celebrities were not impressed by Chris Wallace's moderating abilities

Fox News’ Chris Wallace, who was tapped as the moderator of this first presidential debate, drew almost as much attention as President Donald Trump and former vice president Joe Biden. Wallace had a very hard time keeping the debate under control, which led celebrities on Twitter to yell at him, offer him advice, or just plain make fun of him. (To be fair, it can’t be easy to moderate a discussion with two strong-willed men, like Trump and Biden, who feel passionately about their stances on the topics.)

Bradley Whitford cracked a joke about Wallace’s lack of ability to keep the debate under control, tweeting, “Chris Wallace would be a terrible substitute teacher” (and he might not be wrong on that point). Julia Louis-Dreyfus tried to offer Wallace some guidance, encouraging him to take control and maybe even turn off the mics. Soledad O’Brien could tell that Wallace was struggling to rein the presidential nominees in, constantly trying to bring them back to following the rules, so she tweeted, “Chris Wallace sounds like he’s begging. All the time.”

Recording artist Richard Marx had perhaps one of the most impassioned criticisms of Wallace of the night. He tweeted, “Some of us who care about this country tuned in to listen to a debate between the two candidates for president. All anyone will remember is how big a s**t Chris Wallace took in the bed. This whole thing is so disgraceful.” Ouch!

Some celebrities took this time to urge people to vote

Not everyone was down for yelling on Twitter during the September 2020 debate and not everyone was keen on heavily criticizing President Donald Trump and former vice president Joe Biden, either. Actress Brie Larson was one of those people, telling her followers that she was checking out and that it’s okay for others to do the same. She tweeted, “Take a breath. And remember: your remote exists for a reason if you need to use it for your well-being.” Many of the replies were in solidarity with the choice to not let the debate get them too heated, but some were quick and smart to point out that staying abreast of what Trump and Biden have to say on the topics that will affect our futures is extremely important.

She wasn’t the only celebrity who took this moment to share related messages: Others chimed in with their encouragement for everyone to exercise their right to vote, including Sinbad, who was tired of watching the debate and, instead, told his followers to get out and vote for their futures, as did former NFL player Torrey Smith.