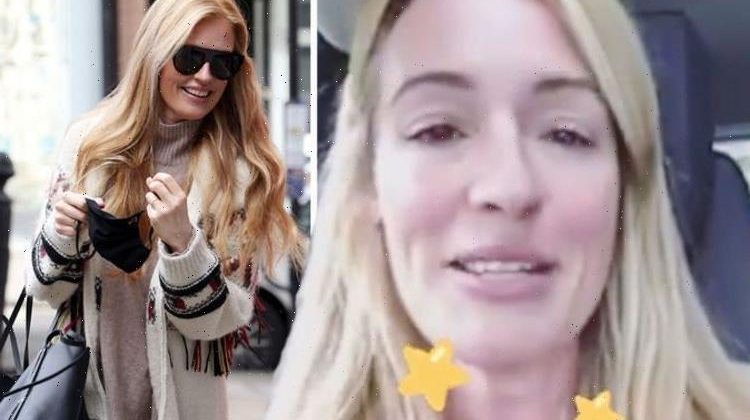 This Morning: Cat Deeley jokingly walks away ahead of interview

Cat Deeley was accidentally head-butted by her youngest son James at the weekend. The TV and radio star was left with a swollen lip following the incident and later took to social media to show off her injury.

“Fat lip!” the 44-year-old presenter captioned a close-up photo of her cut mouth.

In addition to James, the couple, who tied the knot in 2012, are parents to Milo, five.

In an earlier post, a collaboration with denim brand E.L.V., Cat spoke of the importance of family to her.

The TV star revealed that she’d moved back to the UK with her husband and kids with very little notice, after living in America for several years.

“Friends and family are the most important aspect of my life, they inform every decision I make.

“Essentially, they’re the reason why we packed up everything: home, two kids and dog and moved back home to London from the other side of the planet last year… with three weeks’ notice! Crazy? Yes…. But worth it!” she wrote online.

Cat and Patrick were long-term friends before their romance blossomed.

During a podcast appearance, the TV star spoke of a sweet moment that “knocked her socks off”.

She told Made by Mammas podcast that her future-husband had called her at 2am from a pub in Ireland to wish her happy birthday and then flew to America to meet her for brunch at the Beverly Hills Hotel.

He had taken two flights to get there in time.

In 2006, Cat began hosting American television show So You Think You Can Dance and later moved to the US on a more permanent basis.

She presented the long-running show for 13 years until 2019.

The 2020 series was postponed amid the on-going coronavirus pandemic.

The mum-of-two went on to host a number of other high profile shows across the pond before her return.

Cat, who is now back in London, found fame presenting the MTV chart show after working as a model for many years.

She then famously hosted children’s television show SM:TV Live with Ant and Dec.

In April this year, she was the guest host on Lorraine.