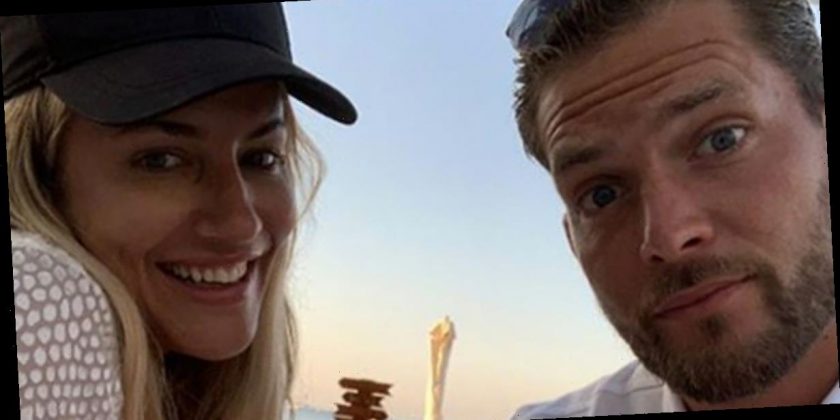 Caroline Flack's boyfriend Lewis Burton has made contact with her publicly for the first time since she was banned from contacting him in December.

The 40 year old was arrested and charged with assault by beating in December after an altercation with her boyfriend, Lewis Burton, at her London home.

She appeared in court just days later to plead not guilty. She will return to face trial on 4 March.

Former Love Island host Caroline enjoyed a day out with a friend as she attempted wall climbing in London on Wednesday.

The blonde beauty was filmed by her pal, Mollie Grosberg, who accompanied her at The Castle Climbing Centre as she made her first steps up the green wall.

Mollie shared the post with her 2,000 followers, captioning it: "We r professional climbers #healthiswealth #vsg [sic] "

Amongst the comments from Caroline's fans wishing her well as she breaks her cover was one from her beau, Lewis.

The 27 year old wrote: "Your both useless [sic] ," alongside a red love heart emoji, before swiftly deleting it.

Earlier this month, Lewis shut down claims the pair had broken up during their time apart as she waits to return to court.

He posted an image of the pair during a previous holiday to his story, writing: "We ain't split [heart emoji] Can't wait to see you [praying hands emoji]".

Caroline has also broken her own social media silence since before Christmas to share a number of snaps of herself with her beloved dog, Ruby.

She appears alongside her pedigree pal in four snaps, simply captioning the post with a red love heart.

Her 2.3million followers were clearly happy to see her make her return to the platform, with the adorable post quickly racking up tens of thousands of likes.

Caroline last addressed her Instagram followers on Christmas Eve — one day after her court appearance — as she revealed she would be taking a break from social media.

Sharing a gorgeous smiling snap of herself at a previous event, she wrote: "Been advised not to go on social media … but I wanted to say happy Christmas to everyone who has been so incredibly kind to me this year…..

"This kind of scrutiny and speculation is a lot to take on for one person to take on their own… I'm a human being at the end of the day and I'm not going to be silenced when I have a story to tell and a life to keep going with ….

"I'm taking some time out to get feeling better and learn some lessons from situations I've got myself into to.I have nothing but love to give and best wishes for everyone. [sic] "