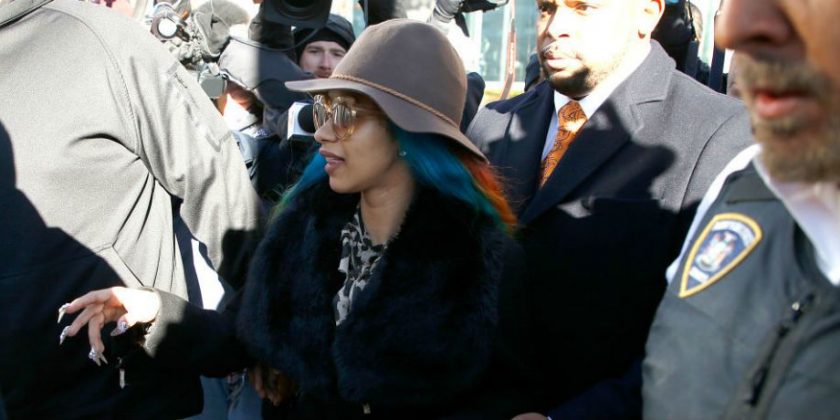 The 26-year-old avoided arrest by finally showing up to a court hearing.

Cardi B has been accused of starting a brawl with two bartenders inside the Angels NYC strip club on August 29. The rapper didn’t appear for her first court hearing and was facing arrest as a result, per TMZ. This time, though, Cardi B made her way to the New York courtroom at the appointed time, where she received a stern warning from the judge about her behavior.

Inquisitr previously reported that Cardi B’s attorney told the judge his client had an “entertainment-related commitment” that had kept her from appearing at her first scheduled arraignment. The judge wasn’t impressed, stating that the rapper’s failure to show up was “not acceptable.” Despite this, an extension was granted from Monday, December 3, to Friday, December 7.

TMZ indicated that Cardi B, whose real name is Belcalis Almanzar, asked the crowd outside the courtroom, “Am I this famous?” Once inside, the judge declared that the performer wasn’t a flight risk and, therefore, could be released without the $2,500 bail that had been requested by prosecutors.

The incident from August was allegedly started by Cardi B as a way to get revenge. Although it hasn’t been publicly announced if the rumors are actually true, Cardi B apparently believed that one of the strip club’s bartenders, Jade, had slept with the rapper’s husband, Offset. An earlier TMZ report quoted Jade as saying that Cardi B had been “threatening her for months.”

According to Reuters, the hip-hop star is facing three charges: assault, reckless endangerment, and harassment. During this morning’s court appearance, the judge issued a ‘no contact’ order, meaning that Cardi B could face additional legal woes if she has any form of contact with the bartenders. This edict extends toward social media and includes not only written threats but any type of comments that are about, or aimed toward, the two alleged victims.

In an interesting twist, CNN posted earlier this week that Cardi B and Offset are no longer together. This was initially announced via Cardi B’s Instagram account in a video that has since been deleted. It’s unknown at this time if the two have reconciled.

On the other hand, things haven’t been all bad news for the popular performer. As the Guardian indicated, Cardi B was nominated for four Grammy Awards, including Album of the Year. This comes just a week after being named one of the Entertainers of the Year by Entertainment Weekly.

Thank you @entertainmentweekly for makin the entertainer of the year ❤️

The hip-hop performer will be back in court on January 31, 2019. If Cardi B is convicted, she could end up giving her next concert inside prison as she faces up to one year behind bars for her role in the strip-club brawl.