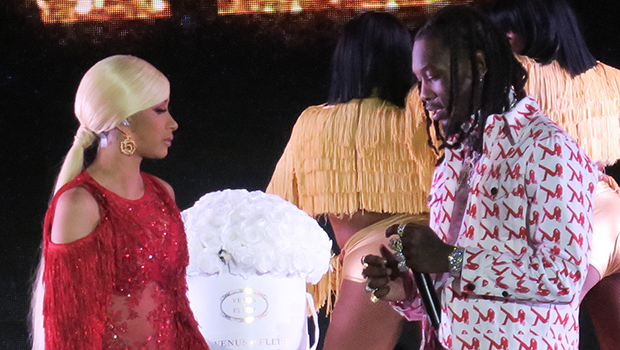 Offset has been doing all he can to get estranged wife Cardi B back into his life. His latest attempt was crashing her set at the Rolling Loud fest and begging her in front of the audience to take him back.

Offset may have done some stupid things that caused wife Cardi B to split from him, but you’ve gotta give the guy credit for doing all he can to win her back. His latest attempt came on Dec. 15 when the 26-year-old was performing her headlining set at LA’s 2018 Rolling Loud festival. Offset crashed her appearance, rolling out a giant wall of red and white flowers that read “Take Me Back Cardi” then walked onstage holding a big bouquet of white roses for his stunned — and less than thrilled — estranged wife.

At first she looked frustrated, turning and trying to walk away and then he grabbed the microphone, told her how much he loved her and how he’d do anything to show her that in order to win her back. Cardi dropped the bombshell on Dec. 5 that she split from the Migos member, less than five months after the birth of their daughter Kulture. They had some words onstage that the audience couldn’t hear, but she was close enough to the mic where she was caught telling him “I’m not having it.” Rejected, Offset left the stage and Cardi went on to crush the rest of her set.

For her part Cardi doesn’t seem like she wants to rekindle their marriage. In her initial breakup announcement video, she said they were good friends and business partners, but they’d “fell out of love.” She did say she’d always have a place in her life for Offset as he’s the father of her child. In an IG live session after her Rolling Loud set she basically reiterated the same message.

In a Dec. 14 IG video, Offset admitted he went a little “crazy” and was doing things he “had no business” in doing during their 15 month marriage. “I was partaking in activity I shouldn’t be taking in and I apologize for breaking your heart, for breaking our promise and God’s promise and being a selfish, messed up husband,” he told her…and the world, adding his only wish for his 27th birthday on Friday was to have his wife back.