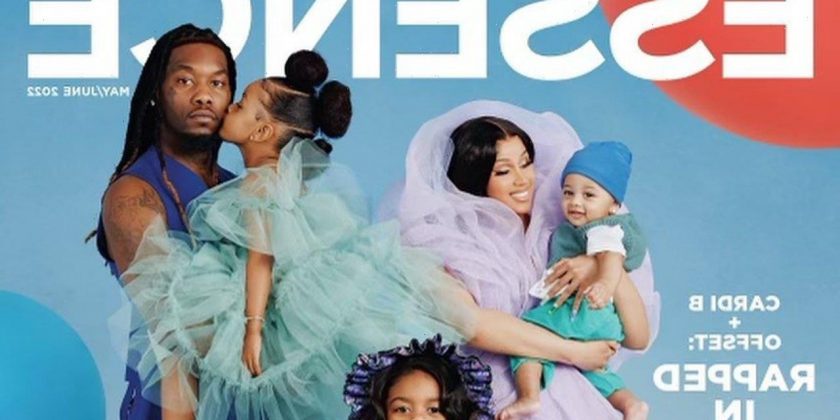 Making use of their social media platforms, the ‘Bodak Yellow’ hitmaker and her husband leave their fans thrilled after sharing some adorable snapshots of their 7-month-old child.

AceShowbiz –Cardi B and Offset have left their fans thrilled. Taking to social media, the couple has debuted the very first photo of their son as well as his unique name seven months after their second child’s arrival.

On Thursday, April 14, Cardi, who recently quit Instagram and Twitter after facing backlash over her Grammy Awards absence, shared a couple of snapshots of her son. In the photos, the little boy could be seen draped with jewelry, including diamond earrings and some necklaces.

The 7-month-old boy was also wrapped in a light blue fur-lined anorak jacket as he relaxed in a baby chair. He also donned a white T-shirt, baby blue pants as well as a pair of white sneakers. In one picture, he looked up as he was photographed from above.

In a separate post, Cardi also shared a family photo from Essence’s May/June issue cover. For the cover story, the 29-year-old femcee shared, “When I first got pregnant, a lot of people used to be on some ‘You’re a fourth baby mom s**t.’ But when I had my baby, I felt like things were going to be alright.”

Meanwhile, Offset was the one who revealed the baby boy’s moniker. “WAVE SET CEPHUS,” he revealed his son’s unique name. He also included a close-up photo of his baby No. 2.

Many fans were quick to gush over baby Wave with many pointing out that he looks like Cardi and Offset’s firstborn daughter Kulture Kiari. “Looking like kulture,” one fan commented, adding several face with hearts emojis. “Kulture Pt. 2,” another social media user said. A separate person chimed in, “Omg !!!! hes sooooooo cute!! Him & kulture twins wow.”

Last month, Cardi herself stated that her baby son bears a striking resemblance to his sister. After a fan asked, “Now that’s he’s 6 months, who does he resemble the most? You or set?” the “Bodak Yellow” raptress replied, “Kulture.”

In January, Cardi said that she’s considering to get her son’s name tattooed on her jaw. “Random but ….I’m 1% close too tatting my sons name on my face….I really really wanna do it!” she tweeted on January 17.

Earlier that month, Cardi claimed that her son, who was 4 months old at the time, was already talking. “I’m not exaggerating, this baby is talking,” said the proud mom in a video she shared on Instagram Story. “Yesterday, I was like ‘You love Mommy? Yeah?’ ” she recalled. “Then I asked him again. ‘You love Mommy?’ And he replied back ‘Yeah!’ “

Cardi further stressed that her son didn’t respond in baby talk. The “Up” raptress added her son also said, “Hello,” while singing along to the popular kids’ show “Cocomelon”. Upon learning of her baby’s milestone, she exclaimed, “Yo, this is crazy.”

“I don’t know if that’s like the pandemic thing. I don’t know if this is normal,” Cardi told her fans. “This s**t is crazy. I need a camera in his room 24/7.” The Grammy-winning artist, who seemingly held her son in her arms, then appeared to turn to the child and told him, “You’re talking, and you just turned 4 months today. You’re talking for real.”