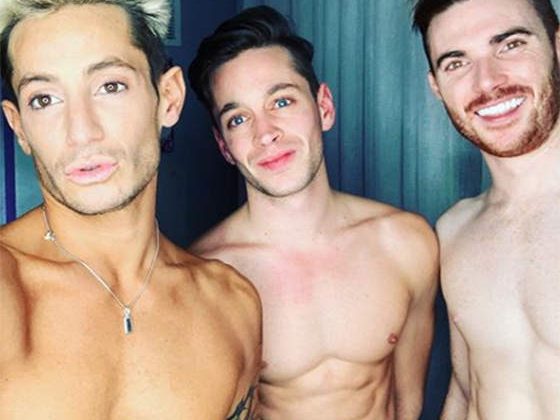 UsWeekly is saying that Frankie Grande is no longer the third wheel of that romantic throuple he had going on with married couple Daniel Sinasohn and Mike Pophis. Cancel romance forever! If these three gays can’t make love work, who can?

Shockingly, Frankie called being in a throuple “so complicated” saying: “You have double the highs, double the excitement… but also double the lows, double the drama.” I can only imagine how much drama came along with being a part of these three homosexuals’ romantic shenanigans.

36-year-old Frankie spoke to UsWeekly while doing promo for his collection of cell phone cases for Fifth & Ninth (wow, can’t wait to get my hands on that hot-ticket item) and he told them about being single:

“I am single. I’ve been single for about a month now… It’s really good… I’m super grateful for my last relationship. I grew so much in it, and at the same time, it wasn’t working out anymore… I’m super glad that we decided to end things amicably. And that we can all remain friends … that’s the important thing.”

Frankie also admitted that being sober during the breakup has been difficult–Frankie celebrated a full year of sobriety last June:

“My emotions were so high and so heavy… As breakups go, it was a good one. It was definitely a good one. But I felt everything.”

And Frankie’s taking a page out of his sister, Ariana Grande‘s book and being thankful for his exes as there are “no hard feelings at all”:

“Thank you, next! I’m so bleepin’ grateful for my exes.”

What a disappointment. Not that they broke up, like, whomstve the fuck would be shocked at this break up? Look at divorce statistics! And that’s only for two people! You think three people are going to be better at making things work? But I am sad this never turned into the trashy reality show I needed it to be. They could have called it Sister Gays, or Frankie Plus Two, or Two VersBottoms, One Top (I’m assuming). It could have been great, even though everyone would’ve rather rinsed their eyes out with broken glass than watch it.