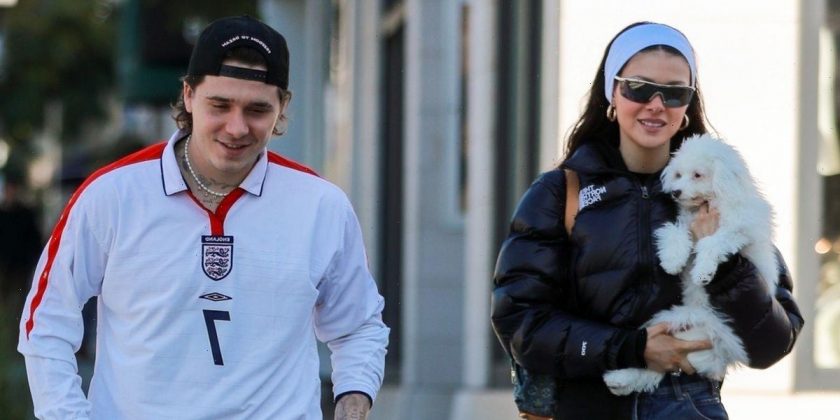 Brooklyn Beckham was seen wearing one of his dad old football tops which was worn when David played in the 2004 Euros.

Brooklyn, 23, was spotted out on a walk with his wife Nicola Peltz, 28, and their adorable dog in Los Angeles on Sunday, 22 January.

The amateur chef, who recently made fans angry over a "raw" Sunday roast, was sporting the white long sleeved top with a big number seven on the back along with the Beckham name in capital letters.

Although going from a different look of black shorts that his dad paired it with when he wore the shirt during matches, Brooklyn decided to pair the shirt with some blue jeans, some white shoes and a black cap.

Meanwhile, Nicola also went for a relaxed look as she also wore some blue jeans along with a cropped, black puffer jacker from The North Face and some platform boots. She finished the look with a pair of sunglasses and a blue headband.

Now retired footballer David wore the white England shirt when he played for the national team as the shirt was part of the 2003-05 kit.

David was known for always playing as number seven, except during his time playing for Real Madrid, since that number was assigned to club captain Raúl.

During his 20-year career, he won 19 major trophies for his clubs and appeared in 115 games for England.

He later stepped down as captain in 2006 after the World Cup.

Brooklyn and Nicola's outing comes just a couple of weeks after her 28th birthday, which saw both David and Victoria wish their daughter in law a happy birthday on social media. Victoria, 48, shared a throwback photo of the duo sat at a kitchen table, which she captioned: "Happy Birthday @NicolaAnnePeltzBeckham [heart emoji] Hope you have a lovely day!!! X"

David took the same approach as he also shared a previously unseen photo of Nicola on his Instagram as he wrote: "Happy Birthday [orange heart emoji] Have a lovely day @nicolaannapeltzbeckham."

Nicola's birthday bash included a luxurious day at the spa with her friends before a star-studded birthday party.

The actress shared photos from her spa day, where she posed in makeup free photos before showing off her wo-tier cake, which featured blue and purple unicorns, cloud decorations and cream icing.

Later at the party, she was seen posing with friend Selena Gomez, who she recently went on a yacht trip with in Mexico, as well as her husband.