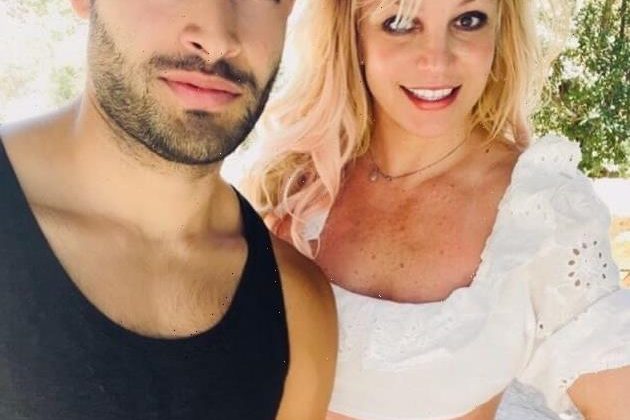 This past year has seen Britney Spears go public with her fight against her dad’s control.

Her conservatorship battle is not an easy one — not in the courtroom, and not emotionally.

Fortunately, Britney has had one person by her side throughout it all.

Taking to Instagram, she is praising her comically handsome boyfriend, Sam Asghari.

Britney shared one of the couple’s best photos in ages to Instagram this week.

Standing beside Sam, her face lit up with joy, she smiles for the photo.

But it was her caption that turned this double-threat thirst trap into a cute moment.

“Not only has this cute asshole been with me through the hardest years of my life,” Britney’s caption began.

“But,” she praised, “he happens to be an extremely good cook!”

Britney concluded her caption: “Fast & Furious franchise, don’t miss out on your next star!!!!”

“F that asshole,” he joked, of course referring to himself.

Sam (shown here, photographed by Britney herself) was the subject of intense scrutiny by Britney’s own fans for a while.

For a long time, there was a lot of misinformation and confusion amidst the horrific conservatorship.

Some of the more fanatical #FreeBritney stans accused him of being some sort of agent working for Jamie, Britney’s widely reviled father.

But actually, that is not the truth.

In fact, Sam openly called out Jamie Spears as a “dick” earlier this year when asked.

He was echoing sentiments of Britney’s sons, one of whom called their awful grandfather as much

Since then, most of Britney’s supporters (those who had not already) have embraced Sam with open arms.

He is an actor, a model, and a fitness trainer … which you can tell by looking at him in just about any photo.

We’re sure that he would be a fine addition to the massively successful The Fast And The Furious franchise.

We cannot speak for his cooking, but we’re inclined to believe Britney’s praise.

It wasn’t his cooking or his eligibility for action films that first drew the two of them together, however.

It was Britney’s eyes latching onto a photo of Sam.

Yes, apparently he was encouraged by a friend to blindly audition for an unidentified music video.

Though reluctant to once again appear as a Hunky Dude in a music video so soon after “Work From Home,” he agreed.

His photo was picked out of an array … by none other than Britney Spears herself.

The two filmed the “Slumber Party” music video together.

Sam then made a bold move, leaving his number behind and hoping that Britney would follow up.

She did, and the rest is thirstory. Sorry, history.

Britney feared speaking out for a long time, convinced that few would believe her and fearful of her father’s reprisals.

This is a man who allegedly threatened to take away her children for many years in order to compel her to do what she wants.

We are glad that Britney is speaking out, and that she has such an excessively muscular source of support by her side.