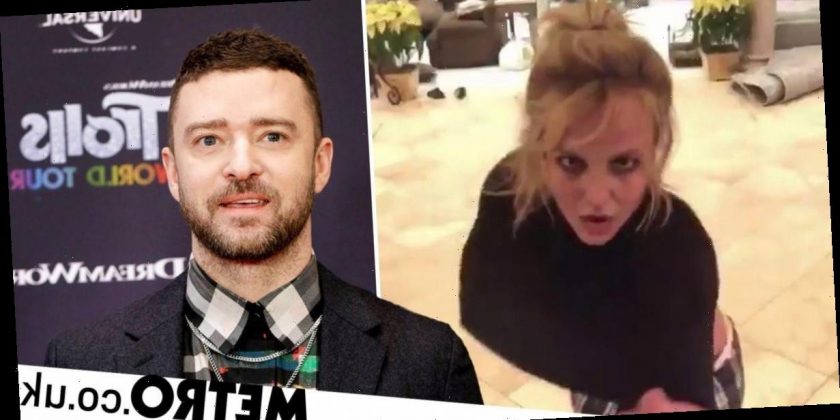 Britney Spears and Justin Timberlake may no longer be together but she still appreciates his music, after sharing a video of herself dancing to one of his songs.

The Toxic singer delighted her Instagram followers when she posted a minute-long clip of herself performing somewhat of an interpretive dance to Justin and Jay Z’s 2013 single Holy Grail.

Yes, that is her tagging Justin at the end you’re seeing.

In the clip, Britney body rolls and twirls around her living area and, even if filmed last week, it’s worth noting that she still had her Christmas tree up mid-January.

It’s not known if Justin has watched the video yet or what he thinks of his ex’s moves but no doubt it’s appreciated at the very least.

After all, he did respond the last time Britney danced to his music.

In April, the pop star shared a video of herself dancing to Justin’s song Filthy and he gave it his seal of approval, commenting: ‘😂🙌🏻🙌🏻🙌🏻.’

Proving there’s no hard feelings between them, Britney addressed their break-up in the comments and explained: ‘PS I know we had one of the world’s biggest breakups 20 years ago…. but hey the man is a genius!!!!

Even Britney’s boyfriend Sam Asghari reacted to the video and replied: ‘Snapchat, Instagram TikTok, Facebook even Myspace was inspired by you [sic].’

Britney and Justin, both 39, were pop’s most darling couple in the early noughties and dated for three years before splitting in 2002.

Of course, both have since moved on with Justin now married to The Sinner actress Jessica Biel. The couple are parents to son Silas, four, and recently confirmed the arrival of their second child, son Phineas. Jessica secretly gave birth in July and Justin only announced the news this month during an interview on the Ellen DeGeneres Show.

Britney is also in a serious relationship with her supportive boyfriend Sam, who she’s began dating around three years ago.