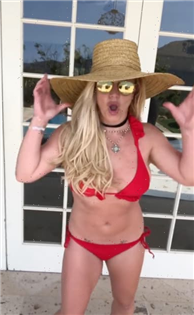 We probably don’t need to tell you that Britney Spears has been in the news a lot lately, or that the most of the headlines about her have been deeply depressing.

Britney’s conservatorship has been a source of controversy for months now, and despite her courageous battle, it seems that the pop icon is no closer to freedom.

Spears’ testimony at her latest hearing was heartbreaking, and it served as a potent reminder that she’s really in dire straits, as opposed to just suffering from the usual rich celebrity problems.

But it’s important to occasionally remind ourselves that there’s still joy in Britney’s life.

After all, while millions are only now learning about the singer’s tragic situation, she’s been dealing with this mess for most of her adult life.

Having zero control over your own life is not the sort of thing one ever gets used to.

But at least Britney is still able to enjoy her brief moments of freedom.

And she does so while rocking some seriously frugal swimwear!

Brit is in Hawaii with boyfriend Sam Ashghari at the moment, and despite some obstacles (like the time Britney got locked in the bathroom at her hotel), it seems the couple is is having an incredible time.

Spears posted a video of herself dancing in a bikini to the Dua Lipa banger “Levitating.”

Either way, Brit apparently doesn’t have expensive taste in bikinis.

“My favorite new baby blue bathing suit I wore in Maui is from @Target,” she captioned the post.

“Girls, you gotta go there cause their suits are bomb.” Britney added,

The clip saw Brit using some editing magic to switch from a red bikini to a blue one, and we get the feeling it’ll help Target sell quite a few suits.

In a much more candid post from the same trip, we see Brit hanging out with a pig — and her reasons for doing so might surprise you.

“I’ve never shared this because it’s embarrassing as I’m supposed to be a fearless performer … but I also used to spend time with horses doing equine therapy a few days a week to ease my social anxiety,” Spears confessed in her caption.

“I find spending time with animals like this peaceful pig to be very therapeutic,” she added.

“I do think it helps when I hear about other people who experience the same thing … it makes me feel like I’m not alone.”

Fortunately, the replies were full of people who understood exactly what Britney was talking about.

It’s a good sign that Britney is once again free to speak about her struggles publicly, rather than communicating with fans through coded Instagram posts as she was once forced to do.

Here’s hoping that she’s recharging her battery in Hawaii, and she’ll be ready to resume the fight against her oppressors once she returns to the mainland.