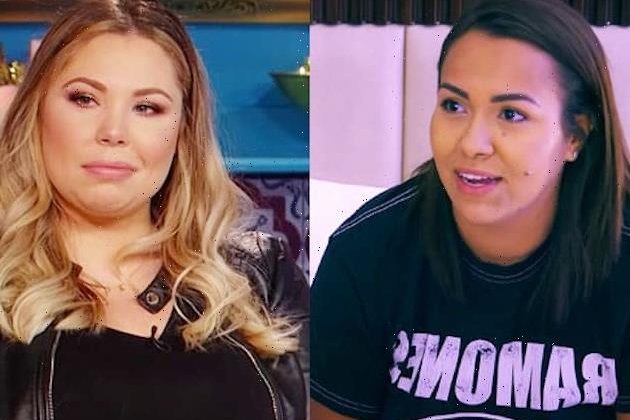 There was a time — not all that long agon, in fact — when it looked as though the feud between Kailyn Lowry and Briana DeJesus had finally come to an end.

It wasn’t that the women took any steps toward burying the hatchet; it was just that they finally learned to steer clear of one another,

In recent weeks, however, the ladies have been back at it.

And their brief truce seems to have only intensified their dislike for one another.

The beef seems to have been renewed a few weeks ago when Kail told her Twitter followers that she would not be appearing in the episode of Teen Mom 2 that was set to air that night.

The reason for her absence was simple:

Back in October of 2020, Lowry was arrested on domestic violence charges.

She requested that TM2. producers not air any of the drama surrounding her arrest, and amazingly, they complied.

Usually, thats’s not the sort of agreement that producers agree to, and Briana felt that ths situation was unfair.

“[Kail’s] trying to soup up the bad girl act and portray herself as this businesswoman, which is great and you can do that, kudos to you, so proud of you, so happy for you,” Bri continued.

“But, when we are on a television show that documents our day-to-day life, it’s not fair to the crew, to the castmates who actually pour out their whole life, right?”

Kail struck the next blow, saying she felt pressured to film with Briana during the taping of the most recent Teen Mom 2 reunion show.

“I will say that, at this last reunion that we filmed, I was feeling pressure to say that I would sit on the couch with Briana. I don’t have beef with [Briana],” she said in an episode of her Coffee Convos podcast.

“I don’t care. It’s water under the bridge at this point, but I still don’t want to be in [her] presence,” Kail added.

“I can wish you the best of luck and genuinely mean that, but still not want to be around you,” Kail said. “And that’s a boundary that I’m setting. That’s not something that I would be interested in, but I hope that you guys have a great life,”

It was around this time that Lowry bashed several of her friends for being fake and disloyal.

Bri, of course, seized the opportunity to cite new evidence of Lowry’s shadiness.

“As one of Kail’s ex-friends [Mark Allen] recently said, she likes ‘yes’ people around her. Look at her track record: she has lost so many friends and clearly holds so many grudges that she’s never able to let go of,” DeJesus told Celebuzz last week.

“And that’s work she needs to do internally, to try to work on herself to figure out why there’s so much hatred in her heart.”

Allen is Black, and he seems to have been singled out by Lowry in particular.

When asked if she thinks race has played a role in Lowry’s recent hostilities, Bri admitted thst thr thought had crossed her mind.

“While I really hope this isn’t the case, it’s not lost on me that she was willing to talk to Jenelle, who is white, yet won’t move on with me when, up until recently, I was the only non-Caucasian cast member,” she said.

“There have been rumblings and reports regarding past racist tweets Kail interacted with and, again, while I’m hoping the color of my skin isn’t a factor here it’s certainly not lost on me that this point exists,” Lowry continued.

Bri was referring to Kail’s feud with Jenelle Evans, during which Lowry attempted to make peace several times, but to no avail.

At one point, Kailyn even sent Jenelle a gift, which Evans lit on fire.

It’s true that Lowry has made no such effort in her latest feud, and cleasly, DeJesus feels that race has been a fact0r in her decision making.

Obviously, it’s a very serious accsation, and if Bri is able to dig up those old, racist tweets, Kail might soon be joining Jenelle on the unemployment line.