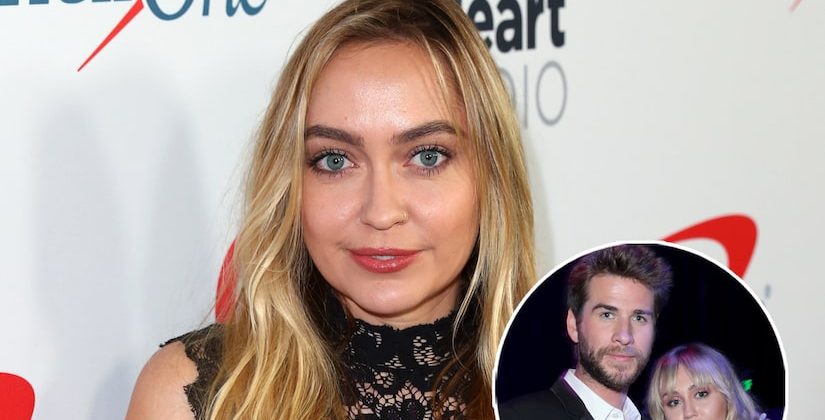 “It’s nothing anything of mine to tell,” says Cyrus.

Miley Cyrus’ sister Brandi is sounding off on the singer’s recent split from Liam Hemsworth.

On Tuesday’s episode of her podcast "Your Favorite Things," which she co-hosts with Wells Adams, Brandi spoke about her recent girls trip with her sister and Kaitlynn Carter to Italy and briefly touched on her sister’s breakup.

"It’s not my business to talk about and it’s nothing anything of mine to tell," Brandi said. "There’s nothing I can really say. I just, I’m here for her, obviously, and I’ve been spending a lot of time with her."

She added, "When [Miley’s] ready to talk about it or whatever, then she will."

The drama was brought up after Brandi joked that Adams, who also hosts a podcast with Kaitlynn’s "Hills" coststar Stephanie Pratt, was "jealous" he wasn’t up to date on what went down.

The "Bachelor in Paradise" alum was referencing paparazzi shots he saw online from the ladies’ Italian getaway, but didn’t specify which. However, if you recall, Miley was spotted kissing Carter, Brody Jenner’s ex, shortly after news broke of her split with Hemsworth.

Mute me if you don’t want SPAMMED

A rep for Miley first confirmed the news of the breakup in a statement to PEOPLE on Saturday.

"Liam and Miley have agreed to separate at this time," the statement read. "Ever-evolving, changing as partners and individuals, they have decided this is what’s best while they both focus on themselves and careers."

"They still remain dedicated parents to all of their animals they share while lovingly taking this time apart," the statement continued. "Please respect their process and privacy."

Miley and Hemsworth have had an on-again, off-again relationship since they first met on the set of "The Last Song" in 2009. They got engaged in 2012, broke up and got back together in 2015. The duo officially tied the knot in a secret ceremony in Nashville, Tennessee, in December of last year.

While the breakup news came as a shock to some, others suspected something was up after Miley shared a photo from her Italian vacation where it appeared she wasn’t wearing her wedding ring.

After Miley was photographed making out with Carter, a shady social media war between Miley and Jenner broke out.

First, Jenner left the comment "hot girl summer" on one of Miley and Carter’s Instagram photos together. Then, he posted a photo of his own, captioning the solo shot of him in Malibu, "Don’t let yesterday take up too much of today." His friend and costar, Brandon Thomas Lee, commented, "Let’s round this scandal out and post a pic of us making out."

Jenner replied, "Watch out! Pics of Liam and I holding hands on the beach coming soon," which didn’t sit well with Miley, who replied to the comment, "Go take a nap in your truck and cool off #hotgirlsummer."

And suddenly, this has become much more significant. #CommentsByCelebs