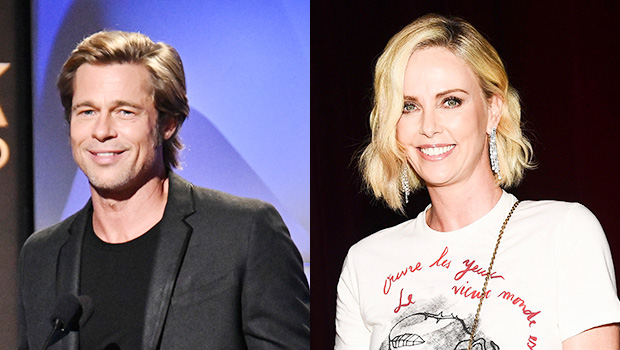 Brad Pitt and Charlize Theron have reportedly found love in each other after being introduced by Charlize’s ex-fiance, Sean Penn, around the holidays.

It looks like Brad Pitt, 55, and Charlize Theron, 43, may be the new Hollywood “it” couple of the year! The gorgeous pair are dating after being introduced by Charlize’s ex-fiance, Sean Penn, 58, according to The Sun, and they were “all over each other” at a recent public event. The sparks reportedly happened around the Christmas season, and Charlize has already been to Brad’s Los Feliz, CA home. “They have been casually seeing each other for nearly a month now,” a source told the outlet. “They’ve been friends for some time — ironically through Sean — but things have developed.”

Charlize and Brad hinted at their romance when they met up at a movie screening together on Jan. 12, after attending separate movie screenings earlier in the day. Brad went to see the 2018 film, If Beale Street Could Talk, which he was an executive producer on, at a private house in the Hollywood Hills, while Charlize was a special guest at a screening of the 2018 film, Roma, at L.A.’s Chateau Marmont.

“Brad came over to Chateau afterwards, changed his outfit and joined Charlize in a corner of the bar,” the source said. “She was on a vodka cocktail while he stuck to mineral water. They were ridiculously touchy-feely and his arm was around her back. At one point he winked at her. Brad seemed in a really good place — they both looked really happy.” Brad quit alcohol after his marriage with Angelina Jolie, 43, didn’t work out.

Brad and Charlize’s romantic outing comes after the father-of-six went through a messy divorce and custody battle with Angelina over the last two years. The former couple finally came to a custody agreement regarding Maddox, 17, Pax, 15,  Zahara, 14, Shiloh, 12, and 10-year-old twins, Vivienne & Knox, last Nov. Charlize, who is the mother of adopted children, August and Jackson, has yet to meet Brad’s kids.

Charlize called off her engagement to Sean back in 2015, and Brad was romantically linked to MIT professor Neri Oxman, 43, in Apr. 2018. In Oct., Neri denied the two were ever more than friends.

We reached out to Brad and Charlize’s reps for comment but have yet to receive a response.