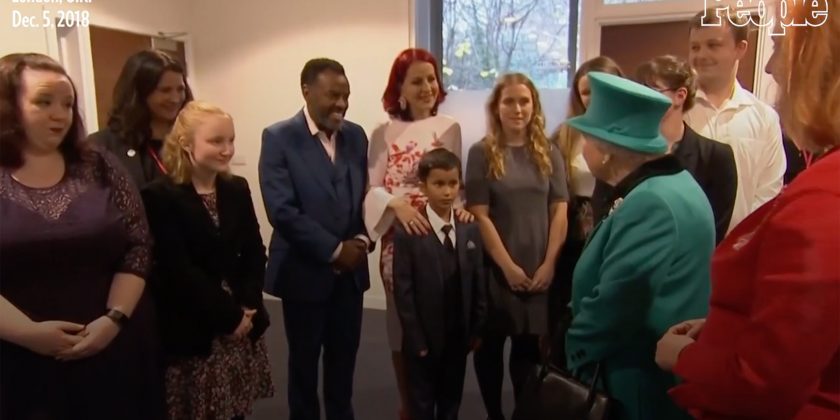 Meeting Queen Elizabeth II proved to be too much to handle for one little boy!

On Wednesday, Nathan Grant anxiously waited in line with his parents to greet the Queen during her visit to The Thomas Coram Foundation for Children. Coram, as it is known, is the United Kingdom’s oldest children’s charity based at the Foundling Hospital in London.

When the moment came to finally meet the monarch, the 9-year-old boy stood quietly beneath his parents and watched as they interacted with Britain’s royal leader. “We are hosting today and this is our adopted son,” Nathan’s mother politely said in her introduction.

But before the Queen, 92, could even get a full response in, Nathan had slid between his mom’s arms and hastily crawled out of the room on all fours.

At first confused, everyone in the room then began to laugh when they realized exactly what had just happened. His mom even attempted to cover her son’s silly antics by joking, “That’s his version of a bow.”

The Queen, who wore a matching teal ensemble to the event, laughed at the comment as she continued down the line to greet other families.

But Nathan wasn’t ready for her to move on just yet and waved from outside of the doorway, yelling, “Bye!”

This is not the first time that a child has unexpectedly acted out when meeting a member of the royal family.

Little Alfie Lunn was supposed to quietly present the Queen with a bouquet of flowers in March 2017 after she unveiled a war memorial in London. Instead, the 2-year-old took decided it was the most opportune time to throw a temper tantrum.

With Prince Philip, 97, watching in amusement, the little boy squirmed in his mother’s arms, tried to jet away from the Queen and even fell to the floor in frustration as his embarrassed mother, in military uniform, tried to wrangle him under control. All while the Queen waited for her posies.

He handed them over eventually, though, prompting a sweet smile from the Queen. Alfie’s mother, Cpl. Michele Lunn told reporters afterward that the Queen had been “very understanding” thanks to having children of her own.

And most recently, Prince Harry and Meghan Markle departed on a 16-day tour of Australia, Fiji, Tonga, and New Zealand, where they met one little boy in Dubbo who was particularly enthralled with Harry.

Once the prince, 34, greeted 6-year-old Luke Vincent of Buninyong Public School, the young boy leaped into his arms for a giant hug before playfully caressing his face and tugging at his beard.

As Harry laughed at the encounter, Meghan, 37, quickly came over to meet the animated young fan and was also greeted with a warm hug.

RELATED: The Cute Story Behind Why Little Boy Stroked Prince Harry’s Beard During Trip Down Under

But the young boy could not get enough of Harry and rushed back over to the prince and gave him a hug, a kiss, and gently pet his head.

“Luke’s thing is Santa Claus,” Anne van Dartel, principal of Buninyong Public School, Dubbo, told PEOPLE after the hilarious encounter. “And so as soon as he saw it [Harry’s beard], we went into the panic mode because he’s touching a member of the royal family! And he continued to do it. And he hugged him. So what you and I can’t get away with, my beautiful friend can.”

RELATED VIDEO: Bold Young Boy Asks Harry and Meghan ‘Are You Married Yet?’ — and Harry’s Response Is Perfection

Van Dartel said that Luke, who has special needs, didn’t necessarily realize he was meeting a prince.

“He just thinks he met a nice man today. Who had a lovely beard. Luke’s a man of very few words, but very lovely actions,” she explained. “What he can’t express in his words, he expresses in his actions.”